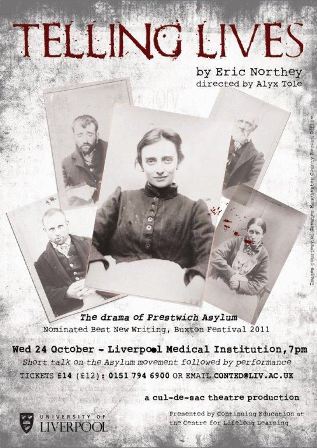 A play which gives a glimpse of life in the former Prestwich Asylum will be shown as part of the University’s Continuing Education programme.

Telling Lives tells the story of life in Prestwich Asylum on the eve of the First World War and raises questions about present day thinking on mental health, poverty and war.

In Brechtian style, with songs, dance and drama it tells the stories of patients, doctors, nurses and the ideas and hopes they shared, before the First World War shattered their lives. Prestwich Asylum in Greater Manchester was open from 1850 until the 1970s and cared for over 3000 mentally ill patients.

Telling Lives was written by Dr Eric Northey, a writer and academic, who came across the admission books for Prestwich Asylum in Greater Manchester County Record Office and was fascinated by the information the books contained which included photographs, family details, medical diagnoses, records of jobs, weights and sizes.

One of the main characters in the play is a young lady called Lily who was a waitress in a temperance hotel, and who according to her medical notes, played an imaginary piano. Eric said: “I came across Lily’s photograph and medical notes. When she was 21 she had a baby out of wedlock and that sad fact sealed her fate. She became very depressed and was confined to Prestwich until she died 30 years later. It seemed like a terrible waste. In her photo she looks directly at the viewer, seeming to make real eye contact, with a wistful appeal. I knew I had to write something about her. It felt like an obligation.”

Telling Lives will be shown on Wednesday, 24 October at 7pm in the Liverpool Medical Institution. There will be a short talk about the Asylum movement before the performance.

For further details contact the University’s Department of Continuing Education on 0151 794 6900 or conted@liv.ac.uk