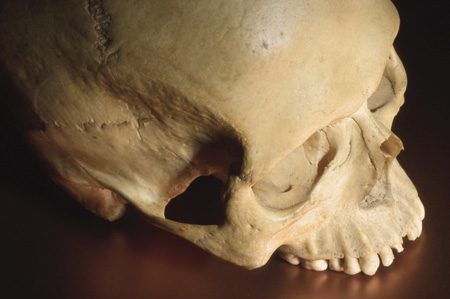 Professor Robin Crompton, from the University’s Institute of Ageing and Chronic Disease, will appear in the final episode of the major BBC series, Prehistoric Autopsy, to discuss how ancient footprints found in Laetoli, Tanzania, could explain the history of human walking.

The BBC2 documentary is screened on consecutive nights this week and focuses on bringing international experts together to construct life-like models of three human ancestors, to understand how they looked and lived.

Professor Crompton joins presenters Professor Alice Roberts and Dr George McGavin,  in the Glasgow-based studio to explain the life of Lucy, from the species Australopithecus afarensis, living 3.2 million years ago.

Professor Crompton examines the Laetoli footprints, that show human-like features of the feet and gait that existed almost two million years earlier than previously thought.  Many studies have suggested that the human characteristics of the foot, such as the ability to push off the ground with the big toe, and a fully upright bipedal gait, emerged in early Homo, approximately 1.9 million years-ago.

The Liverpool team, however, found that the Laetoli footprints, of a human ancestor dating back 3.7 million years ago, show features of the foot with more similarities to the gait of modern humans than with the type of bipedal walking used by chimpanzees, orang-utans and gorillas.

The work demonstrates that many of these features evolved nearly four million years ago in a species that most consider to be partially tree-dwelling. These findings show support for a previous study at Liverpool that showed upright bipedal walking originally evolved in a tree-living ancestor of living great apes and humans.

Prehistoric Autopsy is on BBC2 at 9.00pm, Wednesday, 24 October.