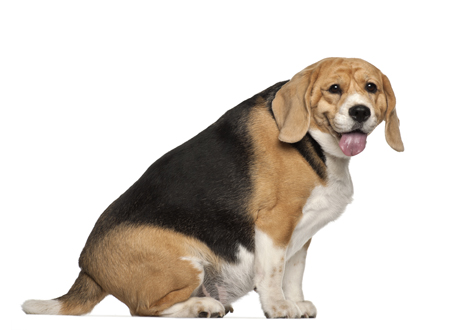 The study found one in five obese dogs have metabolic syndrome

Veterinary scientists at the University of Liverpool have found that, like humans, obese dogs can experience metabolic syndrome, a condition that describes multiple health issues that occur in the body at the same time.

The condition occurs when a number of health problems, such as increased blood glucose and increased cholesterol levels, develop together, with the potential to increase the risk of other diseases, such as cardiovascular disease and diabetes.

Although canine obesity is known to cause insulin resistance, mild hypertension, and high blood cholesterol levels, it has not, until now, been investigated for links to metabolic syndrome, which is common in obese humans.

In a study involving 35 obese dogs, 20% were found to have metabolic syndrome.  Similar to humans with the condition, obese dogs had increased blood insulin, suggested that the pancreas is working harder than normal to control blood glucose.  Blood adiponectin, a protein produced by fat cells that helps control sugars and fats, was also at lower levels than normal. It is yet to be determined, however, what the exact health impacts of these issues are on dogs, and if they are similar to the diseases that metabolic syndrome can cause in humans.

The team demonstrated, however, that the metabolic abnormalities identified in obese dogs, improved when they successfully lost weight.

Dr Alex German, from the University’s Department of Obesity and Endocrinology, said: “It is estimated that one third to a half of the UK dog population is overweight.  A previous study that we conducted showed that a dog’s quality of life improved with weight loss, resulting in better vitality and reduced emotional distress.

“This new research creates a lot of new questions for us.  It suggests that dogs develop metabolic syndrome, similar to humans with obesity-related health problems.  We now need to investigate, however, what health consequences this may have for dogs.   The key point for us is that the problem can be resolved with successful weight loss, and this must be a priority for pet owners with obese dogs.”

The study is published in BMC Veterinary Research