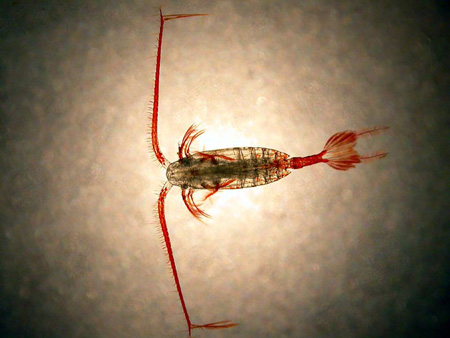 Scientists at the University of Liverpool and Queen Mary, University of London have found that warmer temperatures cause greater reduction in adult sizes of aquatic animals compared to land-dwellers, such as butterflies and other insects.

Research has already shown that animals reared in warmer conditions, usually mature at a smaller size than those living in cooler environments.  For the first time, scientists have now found that this shrinkage is greatest in species that live in water rather than land.

The team at Liverpool and Queen Mary compared body size responses to warming in more than 160 land-dwelling, freshwater, and marine species.  They found that most likely cause of the difference in size is due to the much lower availability of oxygen in water than in air.

Warming increases the need for oxygen by organisms on land and in water, but aquatic species have a much harder task meeting this increased demand.  The research highlights that if temperatures increase, the smaller size of fish, typically harvested for food, could have implications for aquaculture industries and food production.

Dr David Atkinson, from the University’s Institute of Integrative Biology, said: “To satisfy increased demands for oxygen at higher temperatures, aquatic species have fewer options. Reducing the size at which they mature is their way of balancing oxygen supply and demand.

“As our findings are from controlled laboratory studies, we now need to investigate how body size will respond to temperature changes in natural environments.”

Dr Andrew Hirst, from Queen Mary’s School of Biological and Chemical Sciences, said: “Aquatic animals shrink 10 times more than land-dwellers in species the size of large insects or small fish. While animals in water decrease in size by five percent for every degree Celsius of warming, similarly sized species on land shrink, on average, by just half a percent.”

Dr Jack Forster, also from Queen Mary’s School of Biological and Chemical Sciences, added:  “Given that fish and other aquatic organisms provide three billion people with at least 15 percent of their animal protein intake, our work highlights the importance of understanding how warming in the future will affect ocean, lake and river dwelling species.”

The research is published in Proceedings of the National Academy of Sciences (PNAS).