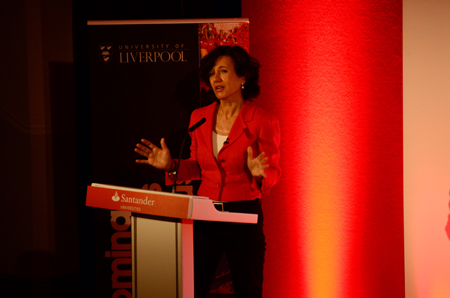 Santander UK CEO, Ana Botin told an audience of University of Liverpool Management School students and staff, and guests,  that “encouraging graduates to work for small companies is incredibly important”.

Ms Botin was speaking in the Victoria Gallery and Museum’s Leggate Theatre, following a morning Breakthrough Event, hosted by Santander, that welcomed more than 100 representatives from some of the North West’s leading small and medium sized enterprises (SMEs).

Appointed Santander UK CEO in December 2010, after a career in the financial industry that started at JP Morgan, Ms Botin told those attending: “We are working with our university partners and I hope we have a fruitful relationship going forward. We have 1,000 partners in 17 countries, including China, Russia and the UK, and gave away £78M supporting more than 3,000 scholarship grants.

“We’ve also organised 500 internships for university graduates. We believe this is important because SMEs sometimes have problems attracting students themselves.

“We believe encouraging graduates to go and work for small companies is incredibly important.” 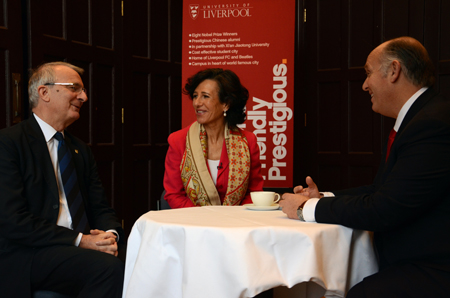 Describing her firm as “still a challenging bank”, Ms Botin said Santander’s strength lies in its close physical relationship with customers, helped by the largest branch network in the world – currently numbering 15,500 in ten markets.

The visit by Ms Botin followed an agreement signed in March that will see Santander fund a variety of scholarships and bursaries at the University over the next three years.

The aim is to promote knowledge transfer between partner institutions, international mobility of students and staff and generate a financial boost for entrepreneurs and researchers in their projects.

University of Liverpool Vice-Chancellor, Professor Sir Howard Newby said: “We value our new collaboration with Santander Universities as it directly supports our efforts to increase international opportunities for students and staff.

“We were delighted that Ana was able to talk to students – providing inspiration for future leaders and entrepreneurs.”