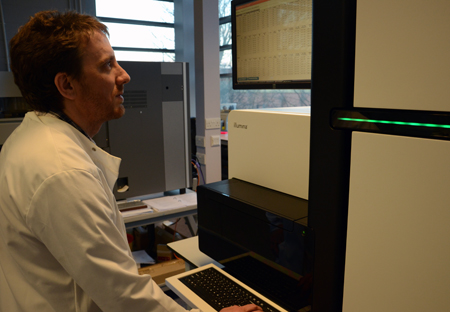 Professor Neil Hall: “We now have instrumentation that can read DNA hundreds of times faster than the systems that were used to sequence the human genome”

Scientists at the University of Liverpool have deciphered the genetic code of wheat to help crop breeders increase yield and produce varieties that are better suited to a changing environment.

Wheat is one of the world’s most important food crops, accounting for 20% of the world’s calorific intake. Global wheat production, however, is under threat from climate change and an increase in demand from a growing human population.

The Liverpool team, at the University’s Centre for Genomic Research, used new methods of sequencing DNA to decode the large wheat genome, which meant that scientists could achieve in one year what would have taken decades to do with previous methods.

With a team of UK and international collaborators, they developed a novel way of analysing wheat’s genetic information to provide breeders with the tools they need to apply the research to breeding programmes.

Funded by the Biotechnology and Biological Sciences Research Council (BBSRC) and published in the journal, Nature, the analysis of more than 90,000 genes, will help wheat breeders produce crop that are better able to cope with disease, drought and other stresses that cause crop losses.

Professor Neil Hall, from the University’s Institute of Integrative Biology and lead author of the research, said: “Wheat is a large and complex genome; arguably the most complex genome to be sequenced to date. Although the genome has not been fully decoded, we now have instrumentation that can read DNA hundreds of times faster than the systems that were used to sequence the human genome.

“This technology can now be applied to other genomes previously considered to be too difficult for detailed genetic study, such as sugar cane, an important biofuel crop.”

In order to understand the variations of wheat genes and their relationship to each other, scientists, in collaboration with colleagues at the Institute of Bioinformatics and Systems Biology in Germany, compared the genetic sequence to known grass genes, such as rice and barley. Partners at Cold Spring Harbor Laboratory and the University of California in the US, also compared the sequences to simpler genomes of wheat’s ancestors.

This allowed the team to assemble the data in a way that scientists and plant breeders can use effectively to produce new wheat varieties that display specific traits suitable for surviving in different environments. The team worked with the John Innes Centre in identifying genetic differences between varieties, which have now been developed by scientists at the University of Bristol as landmarks in the genome to help crop breeders improve wheat grown in the UK.

Dr Anthony Hall, from the University Institute of Integrative Biology and co-author of the research, said: “Understanding wheat’s genetic information and lining up its data into a form that crop breeders can use, will help develop wheat that has particular agricultural traits, such as disease resistance and drought tolerance.

“The identification of genetic markers in the genome will help breeders accelerate the wheat breeding process and integrate multiple traits in a single breeding programme. This research is contributing to ongoing work to tackle the problem of global food shortage.”

Professor Douglas Kell, BBSRC Chief Executive, said: “In the face of this year’s wheat crop losses, and worries over the impact on prices for consumers, this breakthrough in our understanding of the bread wheat genome could not have come at a better time. This modern strategy is a key component to supporting food security and gives breeders the tools to produce more robust varieties with higher yields.”