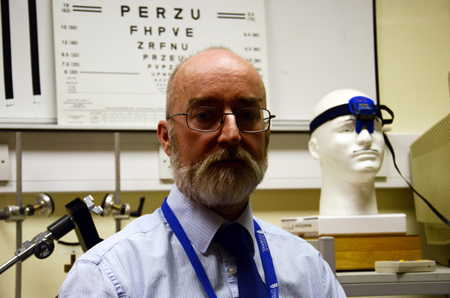 Researchers at the University of Liverpool are seeking British born and raised people of Chinese origin for research into eye movement.

Using an eye tracker, Dr Paul Knox and his team from the Institute of Ageing and Chronic Disease, have already established there is a clear difference between Chinese and Western participants.

Dr Knox said: “When something suddenly appears in our visual world, we point our eyes at it automatically. This type of eye movement is called a saccade. We can measure the properties of this movement very accurately using an eye tracker. When we measure the time it takes for someone to respond to a target appearing just to the right or left of centre, it takes on average just short of a fifth of a second, or about 180 milliseconds (ms).

“But very rarely, someone will make lots of saccades with very low latencies of about 100ms. In this context rare means less than 5% of UK participants. We were surprised to find that when we repeated these simple measurements in China, this type of response (lots of low latency saccades) occurred much more commonly, in between 20% and 30% of healthy adults.”

The experiment has now been repeated using overseas Chinese students as subjects, and initial findings suggest that the low latency responses are replicated.

Dr Knox now wants to hear from British born and raised people of Chinese origin to see if their results mirror those of Chinese born participants, or those of a Western background.

Dr Knox added: “If this group responds in a different way to our Caucasian participants, it would suggest culture is not the explanation for the differences in eye movement behaviour between these groups. If this is the outcome, we may have found an important new tool for studying how the brain, or at least that part of it controlling eye movement, is built.”

If you would like to find out more about volunteering for this experiment, please email pcknox@liverpool.ac.uk