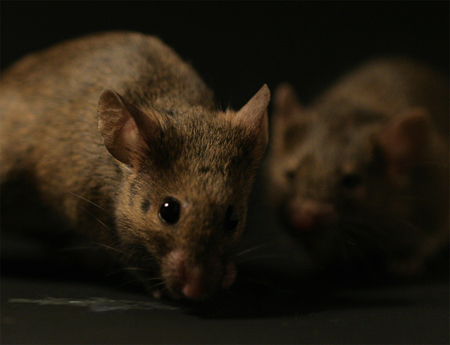 A female house mouse closely sniffs a male’s urine scent mark to detect the protein sex pheromone darcin, which induces her to remember the location of the male’s scent. The owner of the scent mark is just visible out of focus in the background. Picture: Dr Michael Thom

Scientists at the University of Liverpool have found that male mice produce a pheromone that provokes females and competitor males to remember a preference for the place where the pheromone was previously encountered.

Some animals, such as moths, use a sensitive tracking system to trace airborne sex pheromones to the source, while others, such as snakes, follow trails of pheromones left on the ground.  A team from the University’s Institute of Integrative Biology has discovered that mice use a different system to locate mates and competitors by remembering exactly where they have encountered a male sex pheromone called darcin.

Darcin is a small protein in the urine scent marks of male mice.  Although not detected from a distance, females that explore scent-marked areas are instinctively attracted to spend time near this pheromone when they come into contact with it.

The research, published in the journal, Science, shows that the pheromone stimulates very rapid learning of spatial cues associated with its location, so that females remember a preference for this location when they return to the area.

Males use the same mechanism to remember the location of rival male scents, making contact with darcin when they detect a male’s scent that is not their own.   The ability to remember and rapidly relocate sites scent marked by other males will help them to drive off rivals and to counter-mark with their own scent.

Dr Sarah Roberts, from the University’s Institute of Integrative Biology, said: “We have shown that a male sex pheromone in mice makes females and competitor males remember exactly where they encountered the pheromone and show a preference for this site for up to two weeks afterwards.  Given the opportunity, they will find that same place again, even if they encountered the scent only once and the scent is no longer there.”

Professor Jane Hurst, who leads the University’s Mammalian Behaviour and Evolution Group, explains: “This attraction to the place they remember is just as strong as attraction to the scent itself.  Darcin, therefore, induces mice to learn a spatial map of the location of attractive males and their scents, to which they can easily return.  This avoids the difficulty of having to detect specific scents from a distance and trace them to their source.

“Pheromones are used for sexual attraction and for advertising an animal’s location in many species, particularly among mammals.  It will be interesting to discover whether such highly potent associative learning is induced by pheromones in other species and to understand the brain mechanisms involved.”