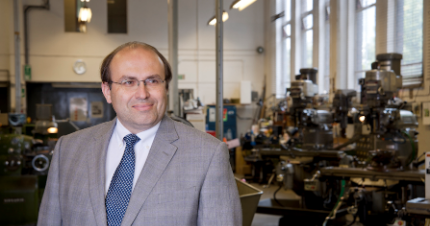 The University’s Particle Physics Group has been awarded £9Million from the Science and Technologies Facilities Council (STFC) for its research into the fundamental properties of the Universe.

The grant is one of the largest in the country for Particle Physics, and maintains Liverpool’s position among the top five universities worldwide for attracting STFC funding.

Scientists at the University will continue their work at CERN on the ATLAS and LHCb experiments at the Large Hadron Collider, which recently announced the discovery of the Higgs Boson.

The group, led by Professor Themis Bowcock, is also studying neutrinos on the T2K experiment which explores how these elusive particles can transmute into each other.

Funding will enable the researchers to look forward to the next generation of experiments at CERN (on ATLAS and LHCb in 2018 and LHeC in 2025), progressing their programme of world leading research and development into silicon detectors. In the neutrinos sector, the group will continue to play a leading role in developing the next generation of Liquid Argon detectors for new facilities planned for 2030.

Liverpool Physicists are conducting ground- breaking research with 1995 Nobel Prize Winner Martin Perl to develop the world’s first ground-based method for measuring Dark Energy. More than 70% of the known Universe is thought to be composed of Dark Energy.

The Science and Technologies Facilities Council, which awarded the grant, recognised the importance of the Liverpool Semiconductor Detector Centre and its associated workshop facility with funding that underpins the strategic importance of these research facilities to the UK as well as to Liverpool.