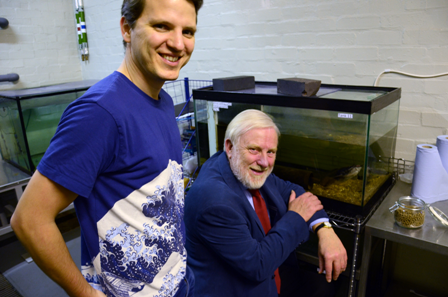 Tom and Andrew at the aquarium

Andrew Miller, Labour MP for Ellesmere Port & Neston has made his return visit to the University of Liverpool, as part of the Royal Society Pairing Scheme.

The Royal Society’s MP-Scientist pairing scheme aims to build bridges between parliamentarians and some of the best scientists in the UK and is an opportunity for MPs to become better informed about science issues, and for scientists to understand how they can influence science policy.

Andrew met with PhD students and senior academics from the Institute of Integrative Biology on his exchange with Dr Tom Price.

The MP went on a tour of the laboratories in the Institute where he met Dr Michael Berenbrink who studies the ability of the catfish to store oxygen as they travel overland between temporary ponds in Thailand. He had opportunity to see an aquarium with a walking catfish (Clarias batrachus).

He also met with undergraduate Chris Maguire and technician Rose Wilmot at the fly lab, where he helped to run a mating experiment examining male ‘paranoia’ in fruit flies.

Tom said: “Over lunch he met the recently appointed tenure track fellows in the Institute, to talk about the areas of science we think are most important to discuss with the Government. This was particularly useful as he was questioning the Prime Minister during the Liaison Committee meeting the following afternoon.”

Andrew will be returning to the University in January to give a talk about the relationship between science and government at the Institute of Integrative Biology Impact Day.