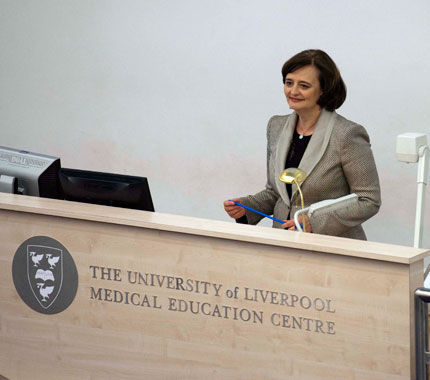 A number of University associates have been recognised in the Queen’s New Year Honours list.

Mrs Blair is a patron of Breast Cancer Care, Refuge, Scope and the Community Foundation for Merseyside. She is also honorary vice-president of Barnardo’s, and president of the Loomba Foundation, which campaigns to alleviate the plight of widows around the world.

Brenda Murray, co-founder of the Liverpool Historical Society who is also a University graduate, was awarded an OBE for voluntary service to heritage and history in Liverpool and Seaforth. Mrs Murray graduated from the University in Social Sciences in 1945.

Margaret Ollerenshaw, University graduate and Chair of Cheshire Police Authority, was awarded an MBE for services to policing. Mrs Ollerenshaw graduated from the University in History in 1961.

David Brailsford, University graduate and Performance Director for British Cycling, was honoured with a knighthood for services to cycling and the London 2012 Olympic and Paralympic Games. He graduated from Chester College in 1991.

Leading the British team to numerous victories at the 2004, 2008 and 2012 Olympics, in 2010 he became manager of the new British-based professional team, Team Sky. He led the Great Britain and Northern Ireland Cycling team at the 2012 Olympics which saw them finish top of the medal table.

Jane Newell, a vice-president at Liverpool School of Tropical Medicine, has been made a Dame. Mrs Newell has been Chair of Royal Mail Pensions Trustees since 2005, where she has overseen the reform of one of the largest pension schemes in the UK. She was recognised for services to the pension industry and to charity.