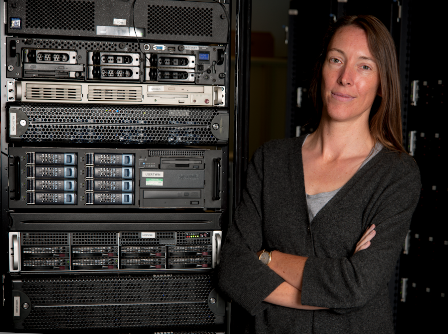 Dr Tara Shears has been awarded a Professorship, making her the first female Professor of Physics at the University.

After graduating from the University of Cambridge, Professor Shears began her career as a particle physicist at CERN, investigating the behaviour of fundamental particles and forces at the OPAL experiment.

Tara joined Liverpool in 2000, after being awarded a Royal Society University Research Fellowship to continue her research at the high energy research frontier. She carried out her research at the CDF experiment, in the Fermilab particle physics facility near Chicago, USA.

In 2004, she joined the LHCb experiment at CERN’s Large Hadron Collider particle accelerator, investigating differences between matter and antimatter, and testing the Standard Model of particle physics.

Commenting on her promotion, Head of Particle Physics, Professor Themis Bowcock, said: “Tara’s achievements on the LHCb experiment have been truly outstanding. She pioneers and leads a whole area of physics on the experiment that no-else had thought was possible on LHCb when it was built. Her creativity and insight have helped Liverpool make important breakthroughs in physics.”

A world expert in her field, Professor Shears is committed to imparting knowledge and maintains an active outreach programme, making regular media appearances and giving talks to the public, to communicate the latest news in particle physics.

She is also one of the academics profiled as part of the University’s Icons Student recruitment campaign  that aims to inspire prospective students and encourage them to apply to Liverpool.

The number of female professors at Liverpool has increased by 47% since 2009, as part of the University’s commitment to recruiting and retaining high calibre female academics.

5 thoughts on “Female first for Physics”