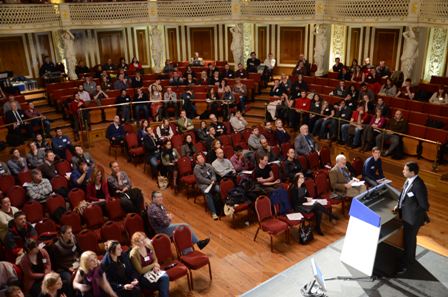 More than 250 scientists from the Institute of Integrative Biology attended Liverpool St George’s Hall for the second Institute Away Day.

It brought together staff and students from across the Institute to explore its academic and technical breadth, and to facilitate networking with 30 industrial and public sector guests.

The event focused on knowledge exchange and societal impact and featured talks from the Director of Technology Transfer at the Wellcome Trust, Professor Ted Bianco; Chairman of the House of Commons Science and Technology Select Committee, Andrew Miller; and Director of the National Oceanography Centre in Liverpool, Professor Andrew Willmott.

Other external speakers included BBC journalist, Victoria Gill, from Media City, Salford, who talked about reporting science research in the national press and the importance of researchers being proactive in promoting their work in the media.

Professor Andy Cossins, Head of the Institute of Integrative Biology, said: “The day was a great success with a near 100% turnout. Staff and students from across the Institute will now have a much better appreciation of the high calibre science underway and the quality of the research facilities available to them.”

The programme included a series of talks describing the latest research from the Institute’s 11 research groups, including discovery of a novel pheromone system in rodents, published in Science, as well as the sequencing of the wheat genome, published in Nature. Other topics included the development of magnetic nanoparticle approaches for tracking stem cells in tissues.

Postgraduate students from the Institute presented two-minute ‘taster’ talks on their projects as part of a competition to win a mini iPad. Prize winners were Quintin Nunes and Achchuthan Shanmugasundram. The talks were followed by a presentation from Dr Zen Lewis, who outlined the Athena Swan programme which aims to provide work/life balance across the Institute and retain female researchers through the PhD, post-doctoral and tenure transitions.