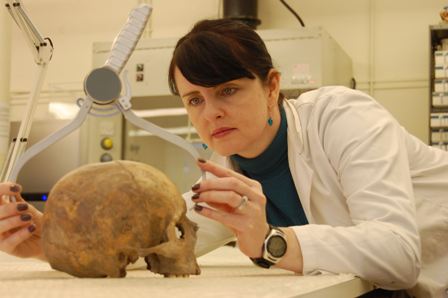 Shirley Curtis-Summers did not expect to solve a 750- year old mystery when examining the skeletal remains of a body from an ancient monastic site. Studying a PhD at the University’s Department of Archaeology, Classics and Egyptology, Shirley is examining human skeletons of monks, canons, lay-people, and benefactors from Norton Priory, Cheshire and Portmahomack, Scotland, to understand the diet, disease, and health of people living there between the 6th and 16th centuries AD.

Shirley discovered that a male skeleton, on display at Norton Priory museum, who museum curator, Lynn Smith believes to have been a knight living in the 13th century, had most likely died from a brutal attack that severed several vertebrae. A weapons expert now believes that the wound was caused by a sword to the back.

The discovery was made whilst Shirley was examining the body as part of a study into ancient diet and disease, where more than 300 skeletal remains are being analysed across the two UK sites.

Shirley explains: “The scientific study of medieval monastic communities provides an excellent snap-shot of the lives of individuals from different social strata; from clerics and lay-workers, to wealthy benefactors. The Middle Ages in Britain was a period where outbreaks of fatally infectious diseases occurred, such as leprosy and tuberculosis, as well as wars fought both at home and abroad.

“The archaeological sites of Norton Priory and Portmahomack were the resting place of ancient monastic communities, some of whom suffered severe trauma, such as blade wounds, and diseases, such as leprosy. Through the reconstruction of their diets, health and diseases, we can learn more about what life was like in medieval Britain, whilst contributing to these important issues in today’s society.

“There have been studies in the past that look at the health of communities in medieval times and those that have looked at diet, but rarely the two together to see how one might impact on the other. I have examined a skeleton with scurvy, for example, but it is clear from the bone that the lesions caused by the disease have healed before death, so it is interesting to look at this in relation to what the bones can tell us about the nutrition of the individual.”

Analysis
Using stable carbon and nitrogen isotope analysis, Shirley is recreating past diets to understand what they can tell us about the lives of the individuals from these periods, but also how it might contribute to the prevalence of diseases today.

Paget’s disease, for example, a condition that causes abnormal bone growth, has been identified in some of the skeletal remains at Norton Priory, but the cause of the disease is still unknown despite it being first diagnosed in the early 19th century. The disease has an unusually high prevalence in North West England today, so data from this study could play a role in understanding it more fully.

Shirley continued: “Observational techniques used to understand the skeletons are coupled with chemical analysis, using the latest technology in isotopic research, to get a clearer picture of what these individuals’ lifestyles were like. Comparing the dietary information that stable isotope analysis gives us, with what we know of the body will help us build a more complete picture of some of the health and wellbeing issues we face today.

“The sites I am researching were places of rest and worship, holding spiritual significance to the local community, as well as being of national and international historical interest to today’s society. Such research is therefore not just about what we can learn from skeletal remains, but also what we can do to ensure that the lives of these ancient communities are remembered well into the future.” 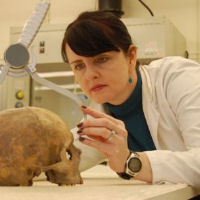