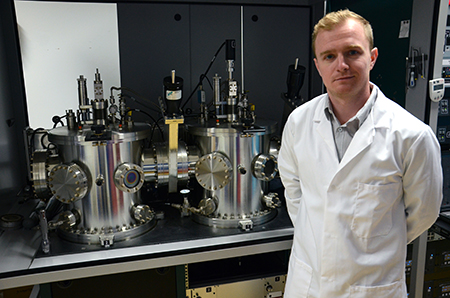 Dr Jon Major by the Stephenson Institute’s sputtering deposition system – the first step in transforming ordinary window glass into solar panels. Scroll down to watch the video illustrating the process

The chemical used to make tofu and bath salts could also replace a highly toxic and expensive substance used to make solar cells, a University study published in the journal Nature has revealed.

Cadmium chloride is currently a key ingredient in solar cell technology used in millions of solar panels around the world.  This soluble compound is highly toxic and expensive to produce, requiring elaborate safety measures to protect workers during manufacture and then specialist disposal when panels are no longer needed.

Safe and a fraction of the cost

Now, a University of Liverpool researcher has found that it can be replaced with magnesium chloride, which is extracted from seawater and is already used in products such as tofu, bath salts and for de-icing roads.

Safe and at a fraction of the cost – $0.001 per gram compared to $0.3 – it has also been shown in the study to be as effective as the expensive and toxic alternative.

Physicist, Dr Jon Major from the University’s Stephenson Institute for Renewable Energy carried out the research. He said: “If renewable energy is going to compete with fossil fuels, then the cost has to come down.  Great strides have already been made, but the findings in this paper have the potential to reduce costs further.”

The cheapest solar cells being manufactured today are based on a thin film of insoluble cadmium telluride.  Alone, these cells convert less than two percent of sunlight into energy.  By applying cadmium chloride to them, this efficiency increases to over 15 percent.

Liverpool research, however, has shown that magnesium chloride can achieve the same boost to efficiency.

Dr Major said: “We have to apply cadmium chloride in a fume cupboard in the lab, but we created solar cells using the new method on a bench with a spray gun bought from a model shop.

“Cadmium chloride is toxic and expensive and we no longer need to use it.  Replacing it with a naturally occurring substance could save the industry a vast amount of money and reduce the overall cost for generating power from solar.”

The study was funded under a grant from the Engineering and Physical Sciences Research Council (EPSRC) and the University of Liverpool.