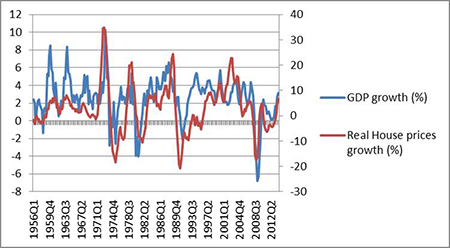 The Bank of England (BoE) has just taken action to cool the housing market. In particular, the BoE’s Financial Policy Committee (FPC) said that it would only allow 15 percent of new mortgages to be at multiples higher than 4.5 times a borrower’s income.

So, why did the BoE take action and would it work?

To answer these questions, I will rely on historical (since the 1950’s) house prices data provided by Nationwide.

One can notice the following: