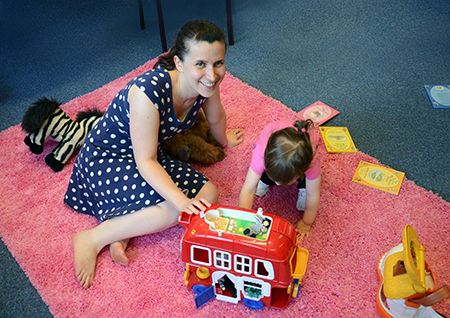 Amy is in the third year of a part-time PhD in the Child Language Study Centre, part of the Department of Psychological Sciences

“I moved to Liverpool from the University of York almost three years ago to work as a Research Assistant on one of Dr Ben Ambridge’s research projects. I was lucky to be able to take up a part-time PhD alongside my RA role, which has allowed me to look in more depth at some of the things Ben’s research project is investigating.

Now I could Snapchat or Whatsapp them – terms that didn’t exist just a few years ago, but that I already know how to use. It’s possible to make (and understand) these new sentences by generalising from what we already know about how language works.

When children are learning to talk, they have to learn to generalise patterns in language for their speech to become like the adults around them. If they didn’t, their language would be very limited and formulaic.

Some children also make overgeneralisation errors with whole sentences, like The magician disappeared the rabbit or Don’t giggle me. These types of errors come about because children hear lots of examples of verbs used in both intransitive and transitive sentences, e.g. The plate broke (intransitive) and Homer broke the plate (transitive).

Many verbs work like this: The window opened > Marge opened the window, The ball bounced > Lisa bounced the ball, etc. In each of the transitive examples here, the person is causing the action (breaking/opening/bouncing) to occur.

The magician disappeared the rabbit, meaning something like ‘the magician caused the rabbit to disappear’,  is a perfectly logical extension of the pattern children have heard with verbs like break, open and bounce.

The second theory is about semantics: there is something about the meaning of verbs like disappear and giggle that mean they are ungrammatical in transitive sentences. Once children have a more complete understanding of the verb’s meaning, they will realise that these sentences aren’t possible.

I’ve been testing the predictions of these theories in a number of ways, running experiments with children in schools as well as with adults here at the University.

For example, I use a grammaticality judgment task to see what children (and adults) think sounds grammatical or not.They watch short videos on a computer and hear sentences describing what’s happening.

The sentences might be grammatical (e.g. The girl giggled) or ungrammatical (e.g. Bart giggled the girl). Participants in the study use a ‘smiley face’ scale to tell me what they think of the sentence – is it good, silly or somewhere in between?

We can then see if the ungrammatical sentences are judged to be worse if the verb is very common (e.g. laugh) in comparison with less common or very rare words (e.g. giggle or chortle). If this is the case (which we have found in several studies), then it is likely that there is an element of statistical learning going on when children learn what not to say, since the more they hear a verb used correctly, the worse they think it sounds when it’s in an ungrammatical sentence.

My first paper investigating children’s overgeneralisation errors was recently published, so please have a look if you’d like to find out more about my research.”