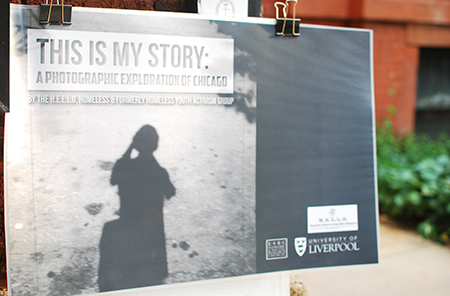 Natalie Robinson is a second year PhD student in the University of Liverpool’s Department of Sociology, Social Policy and Criminology

“In February this year, I moved from Liverpool to Chicago to start six months of PhD fieldwork, exploring homeless experiences in the city.  Supervised across sociology and human geography and funded by the ESRC NWDTC, my doctoral research focuses specifically on homeless young people’s inclusion in, and exclusion from, public urban spaces in Chicago, and uses ‘photovoice’ methods to include participants’ points of view.

Photovoice involves the use participatory photography to discuss community issues and aspirations, with an oft cited aim of enabling community ownership of representations. With prior experience working in homeless services in the UK, I had spent the first year of my PhD preparing for my overseas work – reading up on relevant literature, attending seminars, workshops and PhotoVoice’s facilitator training in London.

I arrived in Chicago with a research plan in theory, but nevertheless endeavoured to remain flexible – entirely open to exactly how this would be realised in practice. My aim was to work with a small group of homeless individuals who were interested and would hopefully enjoy taking part in the project. After a productive meeting, Julie Dworkin, Policy Director for the Chicago Coalition for the Homeless (CCH), connected me with CCH Youth Attorney Beth Cunningham, who, along with her colleague, Policy Specialist Jennifer Cushman, runs the H.E.L.L.O group.

H.E.L.L.O stands for ‘Homeless Experts Living Life’s Obstacles’ and is an activism-focused group for homeless and formerly homeless youth, meeting Tuesday evenings at the Broadway Youth Center (BYC) in Chicago’s Lakeview neighbourhood.Food and transit are provided for all who attend, and any young person between the ages of 12-24 is welcome.

Along with CCH and the youth centre, H.E.L.L.O is also supported by Chicago-based organisations One Northside and the Night Ministry. Each week, the group participate in activities, ranging from arts, crafts, spoken word poetry, and yoga, to discussions around ‘rights’ when dealing with police, community safety and relations. During my time with the group, we also took day trips down to Springfield – Illinois’ state capital – to lobby for youth homeless services funding, as well as to the McDonalds headquarters in Oak Brook, IL to ‘Fight for 15’  demanding a raise in the minimum wage.

My own project involved the distribution of disposable cameras to a number of young people attending H.E.L.L.O, along with an invitation to picture places in Chicago that are meaningful to them. Once developed, the photographs formed the basis for group discussions, with a focus on perceptions of inclusion in and exclusion from city spaces.

This is particularly relevant in Illinois, where since 2013 the Homeless Bill of Rights has formally legislated that homeless individuals cannot be denied access to public spaces solely because of their housing status. Five young people over the age of eighteen volunteered to participate, and chose a select number of photographs to be included in a community exhibition, which they entitled ‘This is My Story’. The exhibition took place in the BYC in July.

The pictures were given titles and captions by the photographers and their peers, and these were displayed alongside the images, explaining the significance of each. The event was well attended by homeless and formerly homeless youth, community members, local and national organisations, CCH staff and Executive Director Ed Shurna, as well as IL State Representative Greg Harris – a strong advocate for homeless services in Chicago. I have thoroughly enjoyed working with H.E.L.L.O and look forward to continuing a relationship with this group, the Chicago Coalition for the Homeless and partner organisations.

It is my hope that my doctoral thesis and related work around this project will contribute to qualitative social research, specifically relating to youth homeless experiences of Chicago, in a way that will be valuable for all involved.”

To see the full selection of participant images, and to read more about the project, please visit www.hellophotoproject.com.

All photographs courtesy of Shruti Sharma, Photographer for the Chicago Coalition for the Homeless