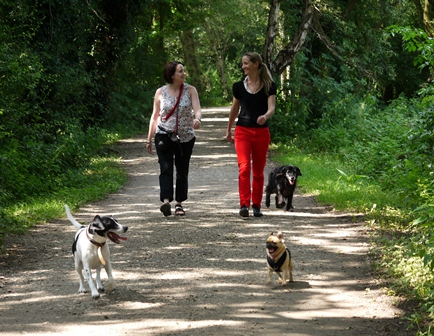 A study from the University of Liverpool has recommended investing in dog owner education and facilities as a strategy to target physical inactivity and problems such as obesity in both people and their pets.

In a review of scientific papers published since 1990, the researchers from the University’s Institute of Infection and Global Health found that access to dog-friendly walking environments and better education about dogs’ physical needs, could all motivate people to get out and take more exercise with their pets.

It is estimated that 40% of dog owners don’t take their dogs for a walk. In the UK, almost a quarter of households own a dog, but less than half of adults meet the recommended level of 150 minutes a week of physical activity.

To find out how to motivate people to use dog walking as a form of exercise, the researchers from the University’s Institute of Infection and Global Health reviewed 31 research studies from the UK, USA, Australia and Japan.

Among the most common findings was that dog owners have a varied understanding of how much exercise their dog needs. This affected how much they took their dog for a walk and this is something that could be addressed with education programs.

It is estimated that 40% of dog owners don’t take their dogs for a walk. In the UK, almost a quarter of households own a dog, but less than half of adults meet the recommended level of 150 minutes a week of physical activity.

Similarly, people without access to high quality local areas that support dog walking, for example parks where dogs are allowed off-leash and poo-disposal facilities are provided, were less likely to walk with their dog and missed out on the associated health benefits.

Population health scientist, Dr Carri Westgarth led the study. She said: “It is easy to assume that people who own dogs are more likely to take exercise, but the reality can be very different. If all people who owned a dog walked with it every day, physical activity levels would be much improved, benefiting the health of both the owners and their canine companions.

“There are a large number of reasons why people do or don’t walk their dog and it is worth considering how we can address this when designing strategies for reducing obesity, or when planning urban areas and public open space. Not being able to let their dog off the leash is a particular put-off.”

The most striking but understandable finding was that the strength of the dog-owner bond is important – owners who were highly attached to their dogs and felt that their dogs gave them support were more likely to walk with it.

Dr Westgarth said: “The study also found that some people are worried about their dogs’ behaviour and may be less likely to take it out to the park – potentially out of embarrassment or worry about how it might act – but lack of walks may also be causing this bad behaviour, due to boredom, frustration or lack of socialisation.

“There aren’t many studies in this area at the moment, but with such a large proportion of people having a dog, it seems that better education, facilities and improved relationships with our pets could be a great way for a large portion of the population to feel encouraged to exercise.”

The paper, supported by a Medical Research Council fellowship, was published in the International Journal of Behavioral Nutrition and Physical Activity. Read it here.

Find out more about taking a course in population health on the University’s study pages.