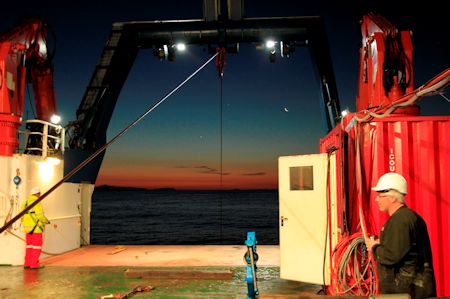 Professor Richard Chiverrell, from the University of Liverpool’s School of Environmental Sciences talks about his experience on board Royal Research Ship (RRS) James Cook.

I have spent 32 days researching on board the RRS James Cook, as part of the Natural Environment Research Council’s (NERC) funded consortium focusing on ice sheet decay.

We sailed from Southampton through the Celtic, Irish, Malin Seas before skirting the edge of the continental shelf south, up to 150km west of Ireland before the return sailing to Southampton.

Despite being a novice to marine-based research, I have taken to it like a duck to water; my original plan was to complete the first half of the cruise and depart, but approaching the halfway port call with changes in the science crew, it became clear we needed more senior members of the team on board. So I stayed for the duration.

My role in the five-year Britice-Chrono programme is running the land-based research, and so you could argue I had substantially misread my remit or got lost by going to sea! But the research aims were to work out how quickly glaciers draining an ice sheet that nearly covered these islands vanished. Many of the margins were located far out to sea on the edge of the continental shelf and that required research off-shore.

Understanding the timescale, rates and behaviour of a former ice sheet with a marine terminating margin is crucial information required by ice sheet modellers to validate simulations of future change in Antarctica and Greenland.

The former British-Irish Ice Sheet is difficult to rival as an example of where a large ice sheet vanished over 10,000-1,000 year timescales. We only have monitored data for contemporary ice sheets for ~40-30 years.

The cruise comprises a twenty person strong science team with the sole focus on the Britice-Chrono programme. It has targeted five ice lobes that 24,000 years ago drained from Britain and Ireland: Irish Sea East, Irish Sea West and the Celtic Sea, the Malin Sea, Donegal Bay and Galway to Porcupine Bank. In each case, our remit has been to survey and sample materials from the inner near-shore areas extending to the outer margins mostly near the edge of the continental shelf.

Day-to-day activities include surveys using geophysical equipment that allow us to see the shape or geomorphology of the sea floor and the sediment structures beneath the sediment surface. We also have two coring groups: a gravity piston core team from the National Oceanography Centre Southampton and a percussive vibrocore team from the British Geological Survey.

Both geophysical and core sampling methods allow us to work out where various former ice marginal positions were located and to sample materials (mostly shells) to radiocarbon date the sediments to work out the timescale of ice sheet decay.

Living on board the RRS James Cook has been a fantastic experience, and the UK Research Community have an excellent research facility which can accommodate comfortably more than 50 staff including the ship crew, science team, technical support and catering. The work environment is excellent with state-of-the-art facilities.

We have accomplished so much, at current count 180 cores and many 1000’s of miles of geophysical survey lines. From work in the on-board laboratories we have collected the right materials, subglacial sediment buried by glacimarine muds occasionally with the shells that we desire for radiocarbon dating.

The wider project is a multi-institution and international collaboration involving universities and RCUK Centres. On-board we have had scientists from eleven or more institutions ranging from seasoned academics to post- and under-graduate researchers. My role on-board grew as I settled in to the way of life, driving site selection and sample in the East Irish Sea, and latterly overseeing the night-shift and part of the geophysics data collection.

Hopefully when we have finished the laboratory analyses the style and pace of the decline of the last British-Irish ice sheet will be one of the best understood in the world.