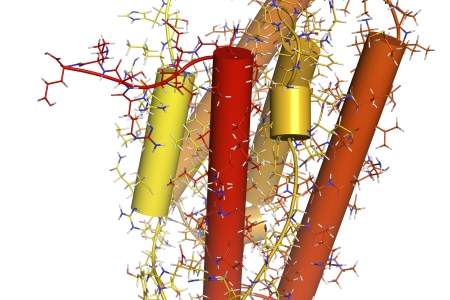 Interferon is one of the drugs to be studied

The University of Liverpool is to lead an international study to investigate the effectiveness of two drugs used to treat a rare but serious disease, in a project that will save the NHS a minimum of £500k.

The three-year research project from the University will study the two most common treatments for the severe disease which, although extremely expensive and widely used, have no clear evidence base to suggest which is more effective in patients.

Behçet’s Syndrome can affect any part of the body, causing swelling of the blood vessels. This can lead to ulcers in the mouth or genitals, blindness, skin rashes or strokes.

There is no cure for the condition and it can affect anyone, though it is most common in people from ‘silk road’ countries in the Far East and Turkey, Iran and Iraq. In England, between one and five in every 100,000 people suffer from it.

One hundred patients who have failed to respond to initial treatment will be recruited to the study and split into two groups.  One group will be given infliximab and the other interferon and the way they respond to the drug will be recorded.

”Evidence-based guidance on the most effective drugs is going to minimise  suffering, lead to the possibility of new treatments and incur savings for health authorities around the world”
Rheumatologist, Professor Robert Moots is leading the study.  He said: “Having no evidence of which treatment works best incurs significant costs to the NHS and leaves doctors in a difficult position when treating their patients.

“This study is designed to identify factors that cause medicine to work in some people and not in others.  Just by collecting this evidence we will save the NHS £500,000 in the cost of prescribing medicine to sufferers.”

It is possible that the drugs taken by each person will affect some, but not others, so the team will also collect genetic information and other data about each volunteer to examine the reasons for this.

This method will, for the first time, allow doctors to prescribe medication for Behçet’s based on the likelihood of it making a difference to the patient’s condition.

Professor Moots, who works at the University’s Institute of Ageing and Chronic Disease and is the Director of the Behçet’s Syndrome Centre of Excellence at University Hospital Aintree, concluded: “Behçet’s is a serious illness which has significant economic and physical consequences for sufferers.

“Giving doctors evidence-based guidance on the most effective drugs is going to minimise this suffering, lead to the possibility of new treatments and incur savings for health authorities around the world.”

The study will last three years and is supported by the Efficacy and Mechanism Evaluation (EME) Programme, an MRC and NIHR partnership.

Find out more about courses in this subject on the University of Liverpool’s Study pages or follow the Institute of Ageing and Chronic Disease on Twitter.