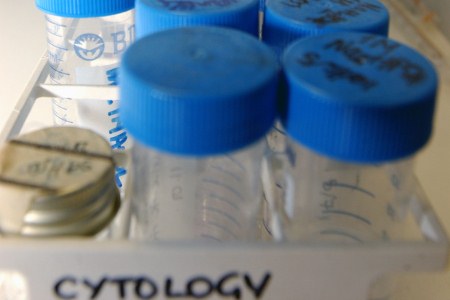 Housed in a wing of the University’s Duncan Building is a treasure trove for cancer researchers – the Liverpool Tissue Bank (LTB).

With over 45,000 samples taken from patients undergoing treatment for a variety of forms of cancer, this institution was the UK’s first tissue bank when it opened in 1993 with a donation from Candis Club, the charitable arm of Candis Magazine.  The LTB is nearing 21 years in operation now and is a partnership between the University of Liverpool and the Royal Liverpool and Broadgreen University Hospitals NHS Trust as well as Aintree University Hospital.

The idea of the LTB is to make samples available to researchers anywhere who wish to use them for studies aimed at finding out more about and developing treatments for cancer. Access to tissue samples, generously given to the LTB by consented patients in the Merseyside and Cheshire region, follows strict governance pathways as recommended by the Confederation of Cancer Biobanks.

One of the most important partners in these studies is housed right next door in the Royal Liverpool University Hospital – drug company Redx Oncology Ltd.

Set up in 2012, Redx Oncology is a division of the Liverpool-based Redx Pharma and specialises in developing new anti-cancer drugs.

By becoming partners with the LTB, we’ve not only been able to gain access to a large supply of samples, but also to the expertise within the University
Redx works extremely closely with the Liverpool Tissue Bank (LTB), as Head of Biology at the company, Dr Mary Ann Campbell explains: “Having access to tissue samples is a major benefit as often drugs developed and tested on cell lines fail to work in patients”, she said. “This costs us time and money.”

“By becoming partners with the LTB, we’ve not only been able to gain access to a large supply of samples, but also to the expertise within the University where some world renowned scientists are working right on our doorstep, available to answer questions and work with us.”

Redx also has a member of staff working full-time inside the LTB helping to catalogue samples and acting as a link between the two organisations and the NHS.  Making sure that the clinical information attached to the samples is detailed and correct is of vital importance as many factors such as the age, gender or health of the patient who submits the sample can have a decisive impact on the results of research. They also support PhD students at the University and are increasingly involved in research collaborations.

Professor Sarah Coupland is the Director of the LTB. She said: “The whole purpose of the LTB is to understand how and why cancers occur, and to improve treatments, in order to extend the lives of cancer patients. By working with a pharmaceutical company, we are able to utilise this resource much more effectively and to provide the link between academia and industry.”

Right now the focus of the collaboration is on treatments for breast cancer, but Redx Oncology also has plans to begin developing drugs for other forms of the disease potentially including colon and ovarian cancer, as well as melanoma.

Professor Coupland concluded: “There are big plans for the future of tissue banking in Liverpool with a purpose-built amalgamated ‘super’ BioBank being planned in a new build facility, bringing together the LTB and smaller biobanks of the University under one roof, further enhancing partnerships such as the one with Redx Oncology.

“The expertise and resources available at the University makes us an attractive partner for industry and the growth of Redx Oncology since the start of our partnership is testimony to this fact.”