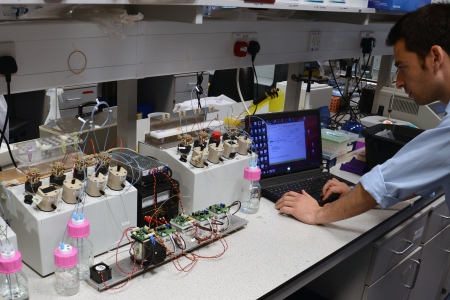 The University of Liverpool is working with a business which is developing an automated system to reduce the time spent on the painstaking procedure of DNA sample preparation.

The project which involves Skalene Limited, the University’s Centre for Genomic Research is designed to produce the best possible samples from small quantities of swabs and to remove as much of the human labour as possible in the process.

The new device, called the Black Box, takes the DNA and shears the sample down from long strands to much shorter sequences suitable for sequencing.  This process results ten times less DNA being used, compared to the conventional method of humans using pipettes.  The team is aiming to make it 50 times more efficient in the future – enabling much better sequences to be obtained from smaller samples.

The project is designed to produce the best possible samples from small quantities of swabs
Professor Neil Hall from the University’s Centre for Genomic Research has been working with Skalene’s Dr Julian White on the project.  Along with colleague Dr Linda D’Amore, he has been testing the equipment and helping to develop workflows.

Professor Hall said: “Automating this process is a big leap forward.  The new method we are developing is faster, gives better results and is more robust than others available at the moment.”

Dr White said: “Working with the University has been vital for making progress given the complex interaction between biology and engineering implicit in the project.  As an SME, on our own we didn’t have access to the variety of expertise and facilities present in the CGR.”