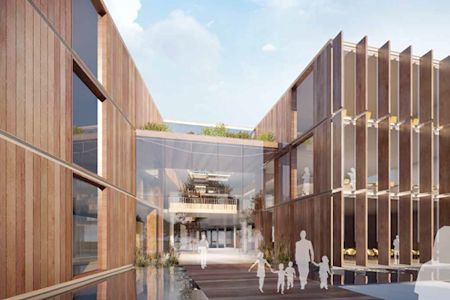 The new facility will allow researchers to develop safer, better medicines for children

Children and young people joined representatives from the University of Liverpool and Alder Hey Children’s Hospital at a special event to celebrate the launch of a project to construct a new research and education facility.

The three storey centre is being built alongside Alder Hey’s new hospital ‘Alder Hey in the Park’ and will be home to around 100 education, research and clinical staff.

The new facility will place Liverpool as a national and international leader in the development of safer and more effective medicines for children and young people.

Young people from the National Institute for Health Research (NIHR) Clinical Research Network (CRN): Children’s Young Person’s Advisory Group (YPAG) filled a time capsule with memories and information about paediatric research at a launch event for the project, which will later be buried on the site of the new Research and Education Centre.

Meeting the needs of children

The young people work closely with research professionals and clinicians to design and develop research that meets the needs of children and their families.

Provost Professor Ian Greer said: “The University and Alder Hey have successfully worked together for nearly 50 years at our Institute of Child Health, which addresses research in areas such as sepsis, bronchiolitis and asthma.

“Together we have made major advances, including the world’s first trial of a fully licensed drug for use in children with arthritis.  We are proud to be fundraising for this new facility and have already received generous donations that will help us to further improve the health of children anywhere in the world.”

Louise Shepherd, Alder Hey Chief Executive said: “The new facility will have research, education and treatment facilities that no other UK or European children’s hospital can offer.

“Sharing knowledge and expertise within a centre such as this will help us to confirm our place as a world leader and provide a facility for the highest level of research and development for future generations.”

The new facility will allow researchers to develop safer, better medicines for children to use in the NHS and throughout the world. It will also help give children in the North West greater access to emerging life-saving technologies and provide facilities that will attract outstanding researchers to Liverpool.

The University and Alder Hey are fundraising for the second phase of the building, and have currently secured just under £15m of the £25m needed to complete the centre. Supporters of the project so far include local people, businesses and alumni of the University.

To donate in support of the project or find out more please visit http://www.liv.ac.uk/giving/child-health/