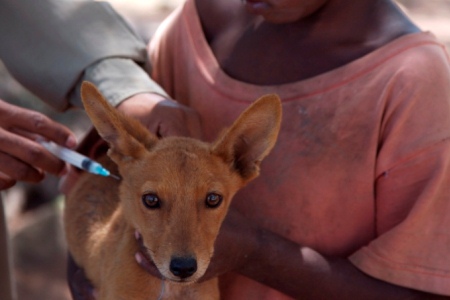 Dr Janet Scott is a Clinical Lecturer at the University’s Institute of Translational Medicine.

Just over a year ago I was in Malawi for the ‘Malawi-Liverpool Wellcome Research Conference’, where I joined other Liverpool colleagues working at the Queen Elizabeth Hospital, Blantyre.  It was here that I saw my first case of rabies.

A young woman who had been bitten by a rabid dog was dying on a mattress on the floor down the side corridor of a Malawian hospital. It was the closest thing to a side room the hospital was able to offer. Her mother had been nursing her, and in the process had been sharing the same cutlery, thereby inadvertently also putting herself at risk. It fell to the consultant to draw the mother aside and tell her that she too could get rabies – and that, if we could find some, she should have ‘post exposure prophylaxis’ a kind of vaccine given after a bite. But, it transpired there was no post-exposure prophylaxis to be had – in the public or private sectors at any price.

The consultant, who like most of us has given many people bad news, was close to tears; this kind mother might have to first watch her daughter die and then face the same herself, for the want of good advice and simple treatment. To add to the frustration – unlike Ebola, there is a cheap and effective control measure: vaccinating dogs. After the ward round, we talked about what we could do for the young woman – there was no hope of saving her life, but could we make her death less awful? One after another management options were discussed and discarded – we basically had no appropriate drugs to give. So later that day her friends and family carried her away from the hospital to die at home.

This is what Rabies is – it does not threaten us here in the UK as Ebola might – but nobody who becomes sick without having been vaccinated survives. Like Ebola, the horrific manner of the death and, the high likelihood of it, inspires fear and distrust in those who are at risk. All of the doctors on that ward round were experienced in making things happen in resource poor settings, – but that only goes so far – without the infrastructure, drugs and equipment, all of our combined degrees came to very little use at all. I had said that I knew somebody working on rabies research but really we all knew that it was not more research that was needed here, but first, having a concerted vaccination programme against rabies in dogs, second having post exposure prophylaxis available and, at the end of the day, decent palliative care for the dying.

A week or so after returning home I got an email “six more children were bitten this morning in a playground – can you put us in touch with that researcher you know”. Professor Sarah Cleaveland of the University of Glasgow visited the University of Liverpool to give the Tony Hart Memorial Lecture and we were able to use the opportunity to set up a Skype meeting with Malawi. She was able to advise on strategy and link the Blantyre team in with a wider support network. My role was to look for sources of money –and with the assistance of the fledgling Rabies Focus Group secured a £5,000 donation from the British Medical Association.

The Rabies Focus Group includes human clinicians, veterinarians and government officials – it is a truly ‘one health’ initiative. It now meets once a month to tackle the rabies problem in Blantyre. So this year on Global Rabies Day I’d like to reflect on progress made and to say thank you to the British Medical Association. The Group has only just begun to implement change – better systems, better diagnostics, better palliative care is now in place – but I hope by next year we will see more dogs vaccinated, less people bitten and less people dying.