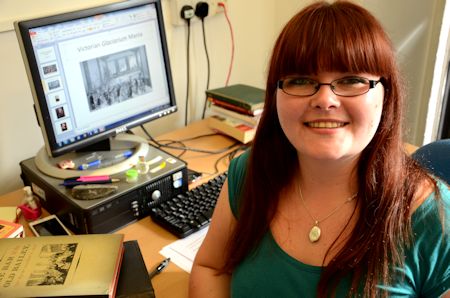 Cerian Griffiths graduated from the London School of Economics in politics.  In 2007, she was called to the Bar and went to work for a number of prosecuting agencies including the Serious Fraud Agency and the Financial Services Authority.

In April of this year shen began her PhD on the Art & Humanities Research Council’s (AHRC) £1.7million Digital Panopticon project under the supervision of Professor Barry Godfrey from the University’s Department of Sociology, Social Policy and Criminology.

“The Digital Panopticon is a collaborative project between the Universities of Liverpool, Sheffield, Tasmania, Oxford and Sussex which will make it possible for people to trace the records of Londoners sentenced to either imprisonment or transportation from 1787 up to the 1920s when the last transported convict died.

My research involves using the Old Bailey Session Papers along with contemporary newspaper reports and literature and focuses upon the prosecution and sentencing of fraud in the 19th Century.

This research will critique the view that fraud was a crime committed by the middle-classes by exploring which offences fall within the potentially broad definition of ‘fraud’.

It is not limited only to the laws surrounding fraud, but also seeks to consider broader issues of how fraud and financial misconduct was addressed by the law.

As well as considering the law and regulations surrounding fraud, I am interested in the victims and prosecutors of fraud and whether prosecution rates give an accurate reflection of the amount of financial crime throughout the nineteenth century.

The final stage of my research will use individual experiences to see how people convicted of fraud-related offences fitted back into society post-sentence. Did those convicted of a deception offence face a different type of stigma to those convicted of other types of offence? Did their lives pick up where they were pre-conviction?

My work has been published and I have presented on a number of other areas of criminal history including the Prisoners’ Counsel Act 1836 and the abolition of the Grand Jury.

I am presenting a paper on company-related fraud at the British Crime Historian’s Conference, held this year at the University of Liverpool on the 26th and 27th of September.”