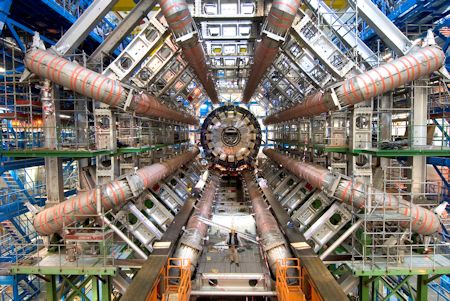 Tara Shears is Professor of Particle Physics at the University’s School of Physical Sciences.

On the 29th September 1954, an international organisation was established in a corner of Switzerland. CERN was a laboratory where, unusually for the time, scientists of different nationalities could work together without politics getting in the way.

These scientists tackled questions of fundamental scientific importance rather than military gain, and, thanks to CERN’s constitution, then gave away their results for free. And, today, CERN is a world centre for particle physics; scientists from more than 110 countries perform their research there.

CERN has made discoveries that have revolutionised our understanding of the subatomic universe, spun-off the most unexpected technologies, and provided a blueprint for international cooperation ever since it started.

It is amazing what people can do when they put their differences aside and work together. What binds the extended workforce of CERN together is their shared common goal – to understand the universe better, to understand everything more deeply, the adult’s version of every child’s desire to know why.

That desire is strong enough to overcome personal differences and prejudice. It drives experts to seek each other out, to constantly, spontaneously network and innovate, to untiringly pursue the currently impossible and make it achieveable. Asking why here demands a high level of skill and expertise, and is a question tackled by a volunteer workforce of thousands, who pursue it in their spare time away from the other responsibilities of their jobs in universities and research institutions across the globe.

You may not be able to name the researchers who, individually, discovered the Higgs boson or found the first evidence that the weak force was communicated by W and Z bosons. You wouldn’t know who invented the technologies used in particle detectors, or who coordinated experimental operations, or who did the menial work watching for alarms during data-taking shifts. And that is the way it should be. It is invidious to single out anyone from this vast collaboration that encompasses engineers, computer scientists, physicists and theorists, because everyone contributes, in some larger or lesser way, to building the experimental facility, to recording and analysing the data, to the final outcome. Because of this, each paper produced by an experiment lists every member of the collaboration, in alphabetical order, as an author.

What counts is the science that’s achieved, not the personalities that drive it along. What counts is knowledge, because that enriches all of us and leaves us legacy.

Liverpool scientists are part of this effort. We direct research, make predictions to test in experiments, make world class particle detectors, do the messy, unappreciated jobs. We help make this science happen and have done throughout CERN’s history, and we’re proud of that.

But don’t think that it’s just scientists that gain from CERN. This research pays back. Out of CERN’s efforts to uncover answers falls not just knowledge but other benefits – the worldwide web, technology for medical imaging, improved industrial techniques and so on.

Fundamental science drives technology forward faster, throws off spin-offs in unexpected areas, captures imagination and inspires students to study STEM subjects, which in turn leads to a numerate workforce and strong economy. It is a collaborative venture where everyone benefits. And more than this, CERN promotes science for peace. A daughter organisation, SESAME, was recently established to provide a synchrotron source for the Middle East. Founded on the same principles as CERN, it provides a rare platform for scientists from Palestine, Israel, Iran, Egypt and neighbouring countries to work together. SESAME tries to build bridges between cultures through science; a noble aim.

When Tom Hanks visited CERN as part of the launch of “Angels and Demons” in 2008, he commented that CERN wasn’t a place where magic was done, it was where magic was explained. That phrase sums up CERN’s mission beautifully. That mankind can work together to achieve so much, for the best of reasons, is just wonderful.  If we can achieve this, here, just think what else we can do.

The Victoria Gallery and Museum is hosting a Department of Physics exhibit, ‘A World a Particle’; to find out more please visit http://vgm.liv.ac.uk/worldaparticle/