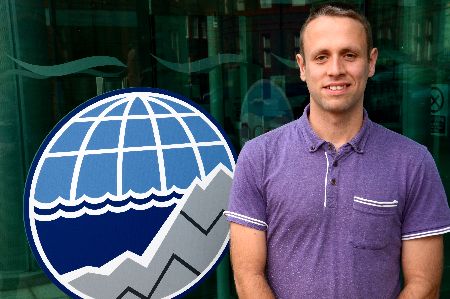 Thomas Prime is a postgraduate researcher undertaking a studentship as part of the EPSRC-funded Adaptation and Resilience of Coastal Energy Supply (ARCoES) project.

It is jointly supervised by the University of Liverpool and the National Oceanography Centre in Liverpool.

“My PhD is entitled “Physical, Operational and Economic Resilience of Energy Infrastructure” which is quite a mouthful and one my family has shortened down to “sandbags for power stations”.

The ARCoES project aims to provide evidence and guidance that enables effective adaptation of energy infrastructure to the consequences of climate change at the coast, thus enhancing the resilience of coastal energy supply.

The biggest threat to the resilience of energy infrastructure, especially in the coastal area, is from flooding. The main threat is from storm surges which can cause significant flooding if they coincide with a high tide.

A classic example of this is in 1953 when a storm surge in the North Sea overwhelmed coastal defences and caused £50 million pounds in damage, or £1.2 billion in 2013 prices. Since then sea defences have been considerably improved, which has reduced the cost and impact of more recent storm surges. The most recent of these occurred in the winter of 2013/2014, causing flooding and coastal erosion and generated insurance costs of £451 million pounds.

In the future the cost of flooding will increase due to climate change. This is primarily a result of sea-level rise (SLR), for which projections into the future are very uncertain. Other factors such as increased storminess and precipitation may also have an effect.

The time period that ARCoES is interested in is from the present up to 2500 AD, (yes that’s right 2500 AD) with a potential range of SLR over this time projected to be between 0.13 m and 11.49 m. This variance is due to uncertainties around our future emissions, and how the Earth will react to increased surface temperatures and CO2 levels.

The 500-year time horizon is also applicable to new nuclear power stations and energy infrastructure as they will be around for a significant fraction of this time period.

To understand and quantify the impact from flooding, I am using a flood inundation model to simulate projected future flood events to see what impact this has on the current energy infrastructure.

Modelling over a range of storm events (1 in 1 year up to 1 in 10,000 year storms) for different SLR projections allows the estimated annual damage or risk (£ per year) to be calculated. Understanding how this cost changes depending on SLR is important to understanding how and when to invest in flood-resilience measures.

It is clear that with this uncertainty, relying on deterministic scenarios orpolicies to determine what defence investment should be undertaken could lead to a significant waste of resources (i.e. overbuilding defences) or a significant cost from flooding that arises because of insufficient defences being in place.

By using a probabilistic economic framework, my research aims to try and constrain the uncertainty of SLR by using a real options economic approach. Real options economics aims to develop a framework which would help in determining the best investment option for each infrastructure asset into the future.

Options include waiting, investing and abandoning at defined points in the future. These options will have different values depending on the realisation of SLR and the type of defences deployed. The framework should help inform future management options to reduce the impact and cost from flooding.

As well as economic outputs, my work is also contributing to a decision-support tool which is the primary output for ARCoES. The flood maps that my inundation model produces can be imported to a series of web browser-based maps that allow coastal managers to see what assets could be at risk for different potential scenarios in the future.

This is designed to be used operationally as well as in a strategic planning role to help with the deployment of resilience measures and resources (e.g. where the best locations would be to deploy temporary barriers) for forecast storms and flood events.

I have found my work so far very interesting and varied, ranging from attending meetings at the Houses of Parliament and presenting at international conferences, to modifying and operating flood inundation models. My aim is to provide a useful framework that can be used operationally and for planning purposes to help with the selection and location of flood defences now and into the future.”