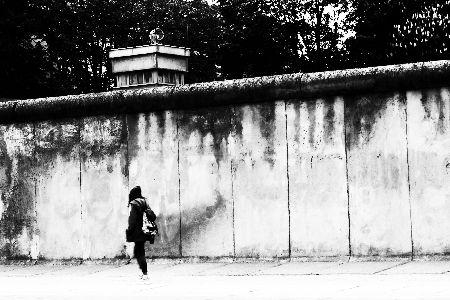 Today, Harald describes the hours leading up to this historic moment as the “most terrible and happiest night of my life”.

Known as The Man Who Opened the Berlin Wall, following the publication of his book under that name, Harald will deliver a talk recounting his experiences, and subsequent reflection, at the University of Liverpool on Tuesday 21 October – the only UK stop of his world tour.

Harald said: “Even though it took some time until I was able to see it this way – not least because it was associated with a social relegation for me personally – I now do regard the fall of the Wall and its knock-on effects as a significant event.

“Even though I cannot overlook the social injustices within the present-day system, I have to say that the fall of the Wall has brought the people in the German Democratic Republic (GDR) individual freedom. Anyone who knew the GDR the way I knew it definitely does not wish for it to return.”

”If, for example, a traveller came from a place in West Germany where military weapons were produced, or if we knew that someone worked in a sensitive area, we got him involved in a seemingly casual conversation which was secretly recorded and evaluated later on”

Harald’s last position was Deputy Officer in Command at the checkpoint, Bornholmer Strasse. He rose to this role after entering the Stasi as a passport inspector 25 years earlier.

Here, he describes his day-to-day activities prior to the fall of the Wall: “My days as a passport inspector belonged to the past, yet I was still involved in selected interrogations of individual travellers – we called this ‘scooping off’.

“If, for example, a traveller came from a place in West Germany where military weapons were produced, or if we knew that someone worked in a sensitive area, we got him involved in a seemingly casual conversation which was secretly recorded and evaluated later on.

But on November 9 1989, the Politburo announced that East Germans were free to travel and Harald’s border crossing was soon subject to angry demands from crowds of GDR citizens. Unsure how to respond, Harald called his superiors but it appeared no-one in command knew what to do.

“In 1990, when Germany was re-unified, the ‘class enemy’ gained a victory and I did not appreciate it”

At around 11.30pm that night, and with the prospect of violence increasing, Harald opened his border crossing and the first few thousand East Germans crossed into West Berlin. The view was that the pressure should be lifted, and that those crossing did so in the knowledge that they would not be able to return to their homes in the East.

But the result was the fall of the GDR administration, the slow disintegration of Communist Europe and the gradual, sometimes painful reunification of Germany.

And, although the narrative often plays out as a simple victory of West over East, Harald is in no doubt that the current German state is born as much of the dissolved GDR, as the then Federal Republic of Germany (FRG).

He said: “In 1990, when Germany was re-unified, the ‘class enemy’ gained a victory and I did not appreciate it.

“Over the years, however, it has become clear to me that the GDR failed because of her inner contradictions and that the people today live freer lives than was the case in our former state.

“One has to say, though, that the FRG also changed as a result of re-unification – the new Germany is not identical with the FRG at the time of the Cold War.”

Harald Jäger: the man who opened the Berlin Wall takes place from 6pm on Tuesday October 21 in the University of Liverpool’s Eleanor Rathbone Building, L69 7ZA. Tickets are free but must be booked. Please visit http://www.liv.ac.uk/events/berlinwall/ for more information.