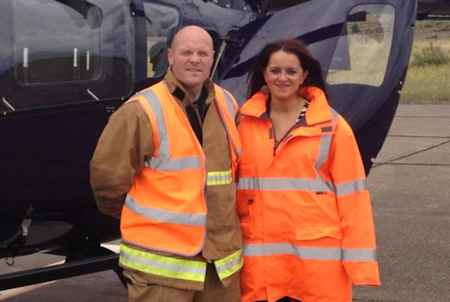 Lauren is in the second year of a full time interdisciplinary PhD with the Critical Critical and Major Incident Research group  in the Department of Psychological Sciences and the Liverpool Institute of Risk and Uncertainty.

“The purpose of my PhD research is to identify the most effective ways to communicate risk to the public during an emergency. This is still a fairly novel area of research despite the number of high profile major disasters that have occurred over the last 30 years, such as Fukushima, and the evidence that ineffective risk communication can result in potentially fatal consequences.

Contrary to popular belief, it is uncommon for people to panic or act irrationally during an emergency. However, their behaviour can be unpredictable due to their lack of familiarity with the situation. It is therefore essential that casualties be given clear, concise and direct instructions during emergencies, although this is rarely at the forefront of emergency service training.

Thanks to the partnership between the University of Liverpool’s Department of Psychological Sciences and Merseyside Fire and Rescue Service, I have had the opportunity to collect data from responders and casualties in numerous multi-agency training events.

I was recently in the unique position of being able to explore casualty perceptions and experiences within a national large scale, live, multi-agency exercise involving police, fire and ambulance and their partner agencies.

The exercise, known as ‘Joint Endeavour’, involved a train derailing from the tracks and colliding with a building, several vehicles and power lines, which in turn caused a bus to crash into an adult learning centre.

Members of the public, Amputees in Action and professional actors played the role of casualties and concerned family members to add a level of realism for the hundreds of practitioners who took part.

Data was collected in the form of pre- and post-event surveys and post-event interviews, which provided a rich, in-depth account of casualty perceptions of how the emergency services interacted with them and how it felt to be a casualty.

In addition to communicating risk information effectively at the acute end of an emergency, informing the public of potential risks and helping them to be prepared in advance can be very useful.

Emergency service resources are finite and the public can be empowered to help themselves and their families, thereby reducing some of the pressure on emergency services and enabling them to use resources more effectively to save lives.

This is one of the concerns of the Merseyside Resilience Forum (MRF), which is a multi-agency partnership prescribed within the Civil Contingencies Act 2004 that provides guidance and support to the communities of Merseyside in order to improve community resilience.

I have been working with the MRF to develop a website that contains the type of risk and preparedness information that members of the public want to receive.

My initial contribution was to run focus groups with members of the Merseyside public to attain feedback throughout the development stages of the website in order to identify the type of information the public wanted to receive, the level of detail and how such information should be presented.

This feedback has been utilised by the MRF to implement appropriate changes before the website went live on 30th October 2014.

My next step is to gather a wider range of public perceptions on the type of information that should be presented in advance of emergencies and how the public can best be helped to be prepared.

This will involve capturing public perceptions through the use of a short on-line survey, the findings of which will be directly fed back to the agencies within the MRF in order to improve their communication and relationship with the public.

To be better informed and prepared for local emergencies, or to contribute to community resilience in Merseyside by taking part in the survey, take a look at the Merseyside Prepared website: www.merseysideprepared.org.uk