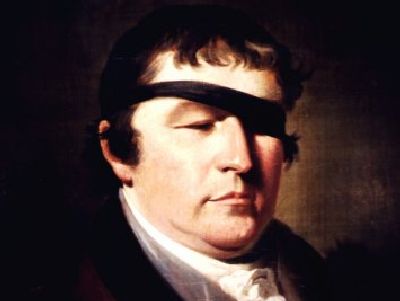 Blinded by an eye infection contracted on one of these ships, Rushton returned to Liverpool, living on a scanty allowance

On 22 November 2014 people in Liverpool will have the opportunity to attend a variety of events commemorating the bicentenary of the death of Edward Rushton (1756-1814), one of the earliest of Liverpool’s poets.

There will be a service in the Anglican cathedral, a visit to the graveside in St John’s cemetery, public talks on his life and works, and a reading of a new play, Unsung, based on Rushton’s life, under the aegis of DaDaFest. There are also exhibitions relating to Rushton at the Museum of Liverpool and the International Slavery Museum.

The reason why the bicentenary has prompted these events is that Rushton was an early and courageous defender of causes whose justice we now take for granted. Rushton had been a sailor in the Liverpool merchant fleet since the age of 11, and was appalled by the conditions on the slave ships on which he sailed.

Blinded by an eye infection contracted on one of these ships, he returned to Liverpool, living on a scanty allowance, out of which he paid a boy to read to him. He later ran a pub and a newspaper, eventually establishing himself as a bookseller in Paradise Street. He began publishing poems in newspapers; then, in 1787, published West Indian Eclogues, a series of dramatic poems set amongst the slaves in Jamaica, confessedly designed to influence public opinion during the first movements for abolition.

As an eye-witness, his testimony was particularly telling. He supported the French and Haitian revolutions, American independence, and the political rights of the individual, while continuing to berate any imperial power that employed slave labour.  A powerful letter of indictment addressed to George Washington, on his ownership of slaves, appeared in 1797.

Rushton also wrote several marine ballads promoting the welfare of discharged naval veterans and inveighing against the press gang; these were sung in theatres and taverns, and circulated in cheap print versions. In the 1790s much of his output was finely printed by the Liverpool-based printer and poet John M’Creery.

Much charitable work of the time was celebrated in Rushton’s fundraising songs, perhaps most eminently the project for an institution to support and train the blind, which derived from a conversation between him and John Christie, a blind musician. The organisation which resulted opened in 1791 and still thrives, as the Royal School for the Blind, in Wavertree.

Rushton was on the fringes of the group of prosperous intellectuals gathered round the philanthropist William Roscoe,  but he had his own networks through debating societies and political pressure groups at a time when it was dangerous to be radical (at least one assassination attempt on him is recorded).

In 1806 Rushton published a small collection of Poems. He also underwent a sequence of complex operations performed by Benjamin Gibson, which restored some limited sight in one of his eyes, enabling him to read – and see his family for the first time. He spent the last years of his life continuing to campaign for social justice, building up a web of connections in Manchester, Belfast, and America.

When he died his character was summed up by a friend in the words: ‘he stood like a rampart and spoke like an oracle’. As the various causes for which he had fought (abolition, parliamentary reform, social security of many kinds) began to achieve their aims, he was remembered more for his marine ballads than his political views. In the twentieth century, however, his status as a local hero, especially one from the darkest period of Liverpool’s history, began to re-emerge.

He is commemorated in a ceiling painting in the old Merseyside Trades Union building on Hardman street (which formerly housed the Blind School). His poetry and prose are now increasingly studied as part of a revaluation of writing in the revolutionary.

The University’s contribution to the Rushton bicentenary comes partly in the form of two books published by Liverpool University Press, The Collected Writings of Edward Rushton and Talking Revolution, as well as a School of the Arts conference on Rushton, supported by the Modern Humanities Research Association and several other internal and external funders.

The University’s Victoria Gallery and Museum is running an exhibition on Rushton, and there is a small display in Special Collections and Archives at the University’s Sydney Jones Library; these two exhibitions draw on our holdings of Rushton material.

Rushton did not live to see the development of higher education in Liverpool, but it is right that the University should participate in commemorating a man whose fiercely-expressed sense of social justice did much to promote the local context in which such civic institutions could flourish.