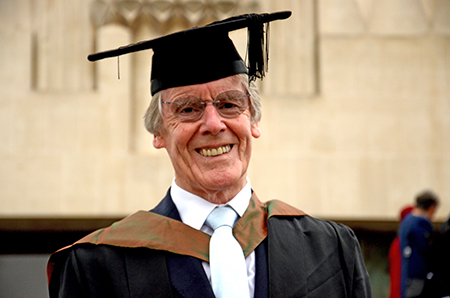 Eric Jones said he felt “quite emotional” stepping up to shake Vice-Chancellor Professor Sir Howard Newby’s hand, having entered the academic arena for the first time at the age of 78.

He said: “It was highly emotionally charged. I’m not really given to that, considering the job I used to do.”

Born in Didsbury, Eric spent his working life in Greater Manchester Police. With his retirement well underway, he decided he wanted a new challenge and so applied for the University’s Masters of Law (LLM) course.

He was invited for interview but, without an undergraduate degree, thought he would fall at the first hurdle.

Eric said: “I was asked if I would be prepared to do a 5,000 word dissertation, so I picked up on the Justice and Security Bill that was making its way through the House of Commons. A few weeks later I was contacted with an unconditional offer.”

The Masters programme saw the school-leaver enter University for the first time as a student. He found himself surrounded by a group almost 60 years his junior, some of whom had excelled at undergraduate level.

Eric said: “The first few weeks were full of despondency, it wasn’t going right. I had to learn how to use a computer, at the same time as getting to grips with the academic side.

“I’d never been to University before and I was with a group of girls, three of whom had first class honours, and I was trying to keep up.

“I was advised to stick with it until Christmas and I’m glad that I did; I think I brought something to the party.

“What surprised me most, you get to this age and you’re supposed to look at youngsters as these recalcitrant beings, but I’ve really enjoyed my time with the young people here and I hope they have as well.”

Eric, who now lives in Southport with his wife, Brenda advised anyone in a similar position to him to not “be put off by age, but don’t use it as an excuse either”.

And now he’s had a taste of the academic life, he’s not ruling out the possibility of an appearance at future University of Liverpool graduation ceremonies.

Eric added: “I’m thrilled by the possibility of pursuing a PhD, but I’ve said I would like to start it when I’m 85-years-old. So I would be all done by the time I’m 90; and then it’s on to job hunting I suppose!”

Find out more about University of Liverpool’s Masters of Law (LLM) programme by visiting: http://www.liv.ac.uk/law/postgraduate-research/llm-by-research/overview/