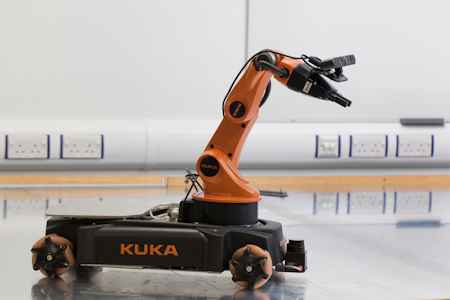 The University of Liverpool is part of a £1.4M research project to ensure that autonomous robots built in the future will be safer, making decisions that are ethical and follow legislation on robotics.

Robots that can think and act without human intervention are moving from fiction to reality. The nuclear, aerospace, manufacturing and agricultural industries are starting to develop autonomous systems that can carry out tasks that are either too difficult or too dangerous for humans.

Funded by the Engineering and Physical Sciences Research Council, researchers at the Universities of Liverpool, Sheffield and the West of England (UWE), Bristol will address concerns that might arise around these new technologies and link new developments to existing industrial standards and responsible innovation frameworks

Professor Michael Fisher, Director of the University’s Centre for Autonomous Systems Technology (CAST), said: “This project brings together world-leading teams from these three universities to develop formal verification techniques for tackling questions of safety, ethics, legality and reliability across a range of autonomous systems.

“Each of the three institutions will make a distinctive contribution to the project, with Liverpool’s particular focus being the development and extension of our leading formal verification techniques and tools.

“These provide strong mathematical proof about the decisions the systems will make and so allow us, in collaboration with Sheffield and UWE, to apply these techniques across a broad variety of complex autonomous systems.”

Professor Sandor Veres, from the University of Sheffield, added: “We need robots that can make difficult decisions, but they must also be able to manage this in situations that are complicated by humans.”

“One example of where this is important is in the automotive industry. An autonomous car might have to choose between two bad decisions: hit a car cutting across the street unexpectedly, or brake suddenly so that the car behind is unable to stop.

“The onboard system would need to be able to calculate rapidly the possible outcomes of a number of different actions in order to arrive at an acceptable decision. Overall passenger and pedestrian safety will be improved.”