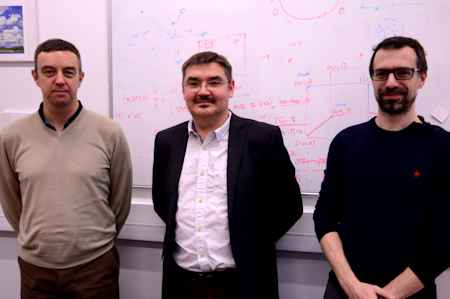 Davide Grossi, from the University of Liverpool’s Department of Computer Science, spent a week at Westminster shadowing Paul Pearce, principal defence analyst of the Defence Science and Technology Lab (dstl), as part of the Royal Society’s Pairing Scheme.

The scheme builds bridges between parliamentarians and UK scientists and offers the opportunity to become better informed about science issues and influencing policy matters.

As well as spending time at Westminster, Dr Grossi visited one of the locations of the Defence Science and Technology Lab (dstl) in Fareham (near Portsmouth).

Dr Grossi said: “This turned out to be a very felicitous pairing as Paul, and many of his colleagues, work on topics that relate closely to my main area of expertise – artificial intelligence – and in particular decision-making under uncertainty.

“It was extremely useful for me to see how Paul and his colleagues approach those topics from the applied angle they work in, and understand what their concerns are.

“It was also exciting to peek into how research is actually done in an organisation such as dstl compared to an academic environment.”

He also attended a science and technology select committee – chaired by Andrew Miller, MP for Ellesmere Port and Neston in Cheshire – which was deliberating the use of biometric data for security and authentication purposes,

Dr Grossi added: “I especially welcomed the opportunity to attend sittings of parliamentary committees and of the House of Commons as I have recently worked on parliamentary debates in my research.

“The interaction with other scientists, from all sorts of disciplines, is a great feature of this Royal Society scheme. Mixing beyond disciplinary boundaries is something that all too rarely happens in our universities.”

As part of the scheme, Paul Pearce came to Liverpool to meet with Davide in the Department of Computer Science and other University researchers – including the Head of Department, Leszek Gąsieniec – who work in complementary research areas.