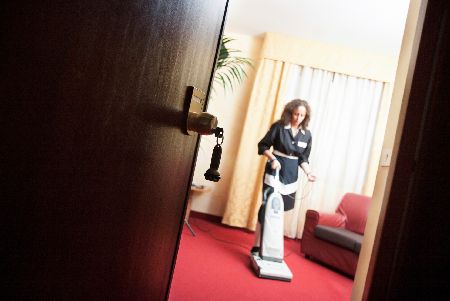 There is much debate in the UK about the best way to tackle human trafficking and forced labour, particularly in light of the forthcoming Modern Slavery Bill, which is currently before parliament and expected to gain Royal Assent in early 2015.

The government proposed a ‘cooperative’ approach with business and companies will soon be asked to publicise what actions they have taken to ensure their supply chains are slavery-free.

The University of Liverpool’s Heseltine Institute, with Dr Alex Balch and Glynn Rankin, have developed a guide to help businesses in the UK hotel sector to meet their responsibility to promote and protect human rights and to understand and address any associated risks.

Dr Balch, researcher at the University’s Centre for the Study of International Slavery, reports:

“Although many anti-trafficking groups have generally welcomed the prospect of new legislation in this area, some have expressed significant reservations. There are concerns that the Draft Bill with its emphasis on criminal legislation, rather than a focus on the environments where forced labour exists, could have little impact on the causes of exploitation.

The government has proposed a ‘cooperative’ approach with business, but during the drafting of the legislation, extra requirements for business were included, which means companies over a certain size have to report on how they are ensuring that their supply chains are free of forced labour.

Every year in the UK there are more than 270,000 hotel rooms available for tourism or business. The hospitality sector accounts for nearly four million UK jobs, of which 2.44 million people are directly employed, including 403,000 reported to be in hotel and related employment – and 1.2 million who are indirectly employed, comprising supply chain and employee-related jobs.

The hotel sector is one part of the UK economy which has contributed to the expansion of the job market. However, many of these posts are seasonal, low-wage service jobs, which are often filled by migrant and agency workers. A 2014 report by the Migration Advisory Committee (MAC) suggested the weak levels of enforcement in low-wage sectors, including hotels and hospitality, has created a structural vulnerability in the UK labour market, leading to potentially serious levels of exploitation.

In 2013-2014, the University of Liverpool took part in a European Commission-funded project to examine risks of human trafficking for forced labour in the UK hotel sector. This led to the creation of the first comprehensive guide designed for businesses in the hotel sector to incorporate a policy response to these risks. The full UK report identifies issues around employment practices and corporate governance in the hotel sector relating to labour exploitation and trafficking for forced labour.”

Why is this happening in the UK hotel sector?

“George Orwell, once a migrant worker in the kitchen of a luxury hotel in Paris, famously described the work as modern slavery. Unfortunately for some people working in the hotel sector in the 21st century, this description might still apply. While large numbers of workers in the UK hotel sector enjoy decent employment conditions, there is growing awareness of exploitative practices, particularly involving agency staff and migrants. The report found that there are negative perceptions of some kinds of work in hotels which is seen as having long hours, low pay, and a lack of advancement opportunity.

Without EU labour to fill employment gaps, the industry could not continue in its present form. Migrants – regular and irregular – as well as seasonal and temporary agency workers, have all been identified as particularly vulnerable to exploitation, and therefore at risk of forced labour. These groups are known to be well represented in the hotel and hospitality sector. This Liverpool research highlights the ways in which workers are more vulnerable to exploitation in certain economic sectors that are characterised by poor working conditions and a lower level of protection in terms of employment rights.

There are different types of recruitment used by the UK hotel industry, but the report found that the main risks around the exploitation of workers could be linked to the use of temporary agencies or outsourcing companies. This was found to be more prevalent in London than in the rest of the UK, but these business practices exist throughout the sector. There is also evidence that some hotels were employing staff directly from their home countries and forcing them to stay in specified accommodation whilst living in the UK.

Do we know the true extent of the issue?

The University of Liverpool report found reluctance on the part of employers to discuss supply chains in any detail, despite claims that due diligence was being carried out, but it also found examples where work has been done by hotels to address working conditions. These include the Whitbread and Intercontinental hotels within the UK. The former has developed a corporate social responsibility strategy which includes commitment to good employment practices, while the latter has decided to adopt the Living Wage in their flagship London hotel and plans to roll this out to their other hotels.

The report also highlighted advice on trafficking and hotels from the International Tourism Partnership and the Staff Wanted Initiative, providing practical guidance to hotels on how to identify problems of exploitation.”

The UK Hotel Policy guide, with funding from the European Commission, brings together best practice in this area, along with a step-by-step process on how companies can incorporate human rights values in their business. The demand for such guidance is likely to increase in the near future when the government introduces a legal requirement for companies to report on their actions to prevent slavery in their supply chains.