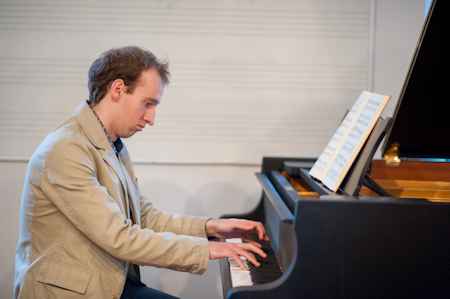 William Green is a second year PhD student in the University’s Department of Music.  His research, suported by the University’s Duncan Norman scholarship scheme, explores the music dramas of Richard Wagner and the musical basis for their continued cultural impact.

“It is a cliché that there is more written on Wagner than on Jesus and Napoleon. Though not strictly true (and differs from country to country; in America the comparison is with Jesus and Abraham Lincoln), it does give an insight into the sheer enormity of Wagner scholarship.

The number of books and articles written about Wagner had reached the ten thousand mark before his death.

The sensuous nature of his music, perceived by some as verging on depravity, has always been a factor. Baudelaire heard in Tristan und Isolde ‘a vast expanse of dark red gradually becoming the incandescence of a furnace. A final explosion of white seemed to be the cry of a soul risen to paroxysm’, More prosaically Clara Schumann described it as ‘the most repugnant thing I have ever seen or heard in my life.’

For Wagnerians, and for less partisan commentators, Wagner’s major works raise many pressing philosophical, social, artistic concerns which still occupy us today, and which, through his musical and dramatic genius, are elevated to a plane on which they assume an enduring and universal significance.

The fact that this achievement sits uneasily beside a virulent anti-semitism, a megalomaniacal tendency, a monumental crudity, an overweening sense of self-importance, should show why this man can still fascinate and revile in equal measure.

The long shadow cast by Wagner’s music and aesthetic ideas over Western culture has been fought artistically for decades, and in the 1970s a process of ‘domestication’ took place on the stage, where Wagner’s meticulous instructions for the realization of his Musikdramen were systematically contradicted, in an attempt to make Wagner somehow more ‘relevant’.

This process of demystification has also been present in more recent academic scholarship. With the artistic achievement taken for granted, potshots are regularly made against his anti-semitism and abortive social revolutionary politics, and their postulated connection to his dramas.

The analysis of his music and its dialectical relationship to drama has been skimmed over. This atomization of the study of Wagner’s music is to be expected; Wagner’s extraordinary ability to be influenced by artistic, political, philosophical, and musical trends allows scholars to concentrate on the by-ways and backstreets of his life and work.

In particular one aspect of Wagner’s work has gone under-theorized, one which cuts to the core of his artistic achievement; the interaction between competing modes of mythic temporality and dramatic characterization in the music dramas, and how these impact on the musical development of Wagner’s operas.

I am focusing in my work on the preludes to each act of the tetralogy Der Ring des Nibelungen, and the way in which a musical idea is set up which then impacts on the following action.

The preludes (Vorspiele) derive from the operatic overture, whose function it was to encapsulate the dramatic situation within a purely instrumental piece. Wagner’s relationship with this tradition is complicated by two factors: his leitmotivicism, which allowed the musical shapes developed in the Vorspiel to permeate the following dramatic action, and his musical relationship with the music of Beethoven, in particular the inherently dramatic aspect of Beethoven’s symphonic style.

This creates, to my mind, a powerful situation where the drama is both forecast by the Vorspiel and engendered by it, and I use varied music-analytical techniques to show how this process works.

Hopefully this will mediate between the understanding of Der Ring des Nibelungen as a mythical portrayal of the struggle between love and power, good and evil, gods and humanity, and as a peculiarly human and personal drama.

To this end I focus on the final drama in Der Ring des Nibelungen, Götterdämmerung. This drama forms the crux and the raison d’être of the cycle. However, despite the title, it does not literally feature the downfall of the gods.

Rather this takes place through the intrigues of a drama of love, betrayal, infidelity, and murder. I hope to show how my theoretical ideas about the Vorspiele of the dramas can be extrapolated to interpret the action of Götterdämmerung.”

Studying the music of Wagner is a very rewarding experience; since Wagner’s interests were so broad, I find myself learning about the tragedies of Aeschylus, the philosophy of Hegel, and chromatic voice-leading during the same week!

I feel that being able to work on such an important and controversial figure in Western music gives me a chance to hone my thinking about key musical and philosophical topics, and to explore the astonishingly varied ways composers have thought about setting words, and ideas, to music.