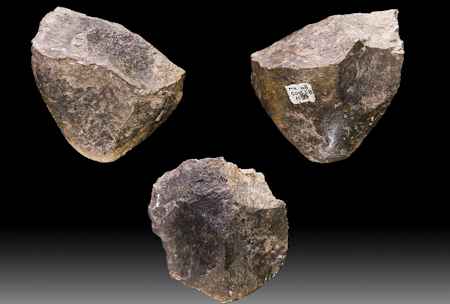 A study by the University of Liverpool has found evidence of the co-evolution of early Stone Age tools and our ability to communicate and teach, suggesting that communication amongst our earliest ancestors may be more complex than previously thought.

In a study, participants were divided into groups and taught by an expert stone tool-maker how to make a sharp `flake` tool using one of the five learning mechanisms which included talking, gesturing, imitating and simply observing.

The first participant within each group then passed on their tool-making skills to the next participant. The flint tools produced along each chain were weighed, measured and assessed for quality.

Oldowan is the earliest stone tool industry in prehistory. Oldowan tools were used during the Lower Paleolithic period, 2.6 million years ago. It was followed by the more sophisticated Acheulean tool making industry 1.7-million yearsago which the team suggests is indicative of indicates the evolution of better transmission, potentially a form of proto-language.

There is fierce debate around language evolution during the Oldowan period. The remains of Oldowan tools show that they were systematically produced, maintained and repaired, implying that some sort of learning and practice would have been required. However, the fact that the Oldowan culture remained largely unchanged for 700,000 years suggests poor social transmission.

Liverpool Archaeologist, Dr Natalie Uomini, said: “Our study supports the idea that a simple form of language could have started to evolve as early as the Oldowan period. It demonstrates that teaching – and ultimately language – would have taken forward Oldowan tool making and therefore shaped human evolution.

“The mechanisms and the appearance of more complex Acheulean tools, 1.7 million years ago, are compatible with the evolution of better transmission, such as a form of proto-language.

“It has been argued that Oldowan stone tools can be learnt very simply, just through imitation and even the study participants who received no instruction at all were able to make a few flakes through trial and error.

“However, those who were verbally taught received an immediate benefit, even in the short five minute learning period. This shows the tremendous power of teaching and language on learning to make the simplest stone tools.

“This shows that not only are they not as simple to make as previously thought but that actually teaching and language really do help.”

Dr Thomas Morgan, from the University of California, Berkeley, who collaborated on the study added: “Our findings suggest that Oldowan hominins were probably not talking. These tools were the only tools they made for 700,000 years so if people had language, they would have learned faster and developed newer technologies more rapidly.