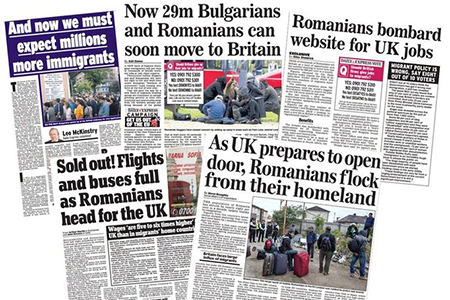 The British press has been accused of many things in recent years, most of them bad, but how can we measure performance in coverage of a particular subject such as immigration, and how is this changing over time? Surveys have identified significant gaps between perception and reality suggesting the UK public is not very well informed on the topic; content analysis of media coverage has also uncovered problems of accuracy, distortion and use of stereotypes in the language used.

There are concerns about how this will play out in the forthcoming general election. The thinktank British Future recently pleaded for a more “civilised” and “open” debate on immigration that incorporates a broader range of different views.

But to what extent can we establish whether the public debate is actually becoming more narrow or less “civilised”? The research presented here provides some answers to these questions by focusing on the changing quality of coverage on immigration in the UK press, comparing two years (2006 and 2013) when immigration rose to the top of the political agenda. The main issue during these periods was European free movement rules and whether to open up the labour market to citizens from Bulgaria and Romania.

The analysis demonstrates that the way the UK media reported the immigration debate has shifted over time and is becoming increasingly “dehumanised” – dominated by a narrow range of negative arguments with less coverage of any positive aspects. The findings raise fresh concerns over the quality and balance of the public debate over immigration in the UK – a topic expected to be at the forefront of the upcoming 2015 general election.

The study (published in Politics) was conducted by myself and my colleague Ekaterina Balabanova at the University of Liverpool. It included more than 500 articles from six newspapers – both tabloid and broadsheet – representing the political spectrum. The method was a “framing analysis” which sought to establish the range of arguments that were present in the press coverage.

These were divided into communitarian and cosmopolitan “frames”. The former featured arguments defending the maintaining or tightening of immigration controls including, for example, to safeguard public security or to maximise domestic social justice, including the preservation of public goods for citizens. Cosmopolitan “frames”, by contrast, were those where we identified arguments celebrating international mobility and the outcomes of greater levels of diversity, or criticising the ethical basis of contemporary immigration controls on the basis of human rights.

The findings show a dramatic increase in the number of articles and columns covering the topic and a significant shift in the nature of the coverage: the debate narrowed considerably and became much more negative across all of the newspapers in the latter period.

In 2006 there were some “positive” or progressive arguments for less stringent immigration controls in press reports based on cosmopolitan ideas. These were often partially based on an economic case – but there were also some references to the importance of freedom of movement, justifying this on the basis of human rights (24% of total).

By 2013, the tone of coverage was unequivocally negative with the focus across different newspapers being on reasons for greater restriction of immigration. These were dominated by certain types of communitarian arguments, for example, about the threat immigrants posed to public order, the abuse of the welfare system or the pressure this placed on public services (92%). In the latter period there were far fewer articles that included arguments based on cosmopolitan ideas (down to 8% of the total).

The study found a reduction in the range and balance of ideas informing the debate by 2013. Interestingly the main change was due to the supposedly more ‘liberal’ publications converging towards the line normally associated with the right-wing press, namely a focus on domestic social justice and security.

While it is perhaps unsurprising to see an increase in welfare chauvinism during harder economic times the dehumanised tone of 2013 was quite marked. How did this happen?

The results of the research confirm a significant shift in the quality of the public debate on the subject in the UK since 2006. Analysis of the findings suggests that seeds for the shift could be linked to earlier political strategies on immigration by the then Labour government.

At the time, decisions to pursue a more expansive labour migration policy were defended on the basis of expert evidence on economic benefits. While this elitist approach created a policy narrative that more closely fitted the reality of increased migration levels it failed to make the case at the human level. Not only were moral or rights-based justifications for free movement ignored, there was a patronising attitude towards public concerns, paving the way for populist parties to take advantage when the economy dipped.

The strategy of the current government to make a pledge over a target for net migration has certainly done little to neutralise negative press. Indeed it seems to have backfired spectacularly – and immigration is now a topic that appears to threaten electoral damage for all three major parties.

The only potential winner at this point seems to be UKIP which campaigns heavily on immigration – particularly free movement in the EU – as part of its aim to secure Britain’s exit from the EU. However, it remains to be seen if UKIP’s policies – and candidates – will stand closer scrutiny as the election nears.

The quality of the media’s coverage of immigration is something we should pay attention to. Ever since the Leveson inquiry, there have been more questions than answers over the performance of the UK press. These relate to deeper issues about integrity and corruption, the role of government regulation and the implications of concentrated patterns of ownership – but in the end we need a press which fulfils its presumed democratic functions: to inform, to scrutinise, to investigate and to hold power to account.

Close scrutiny of the performance of the UK press on immigration adds further to doubts about the role it is playing in providing a platform for an open and vibrant debate. Indeed, over the last 10 years it appears to have been complicit in the narrowing of a discussion that is now characterised by an increasingly negative tone.