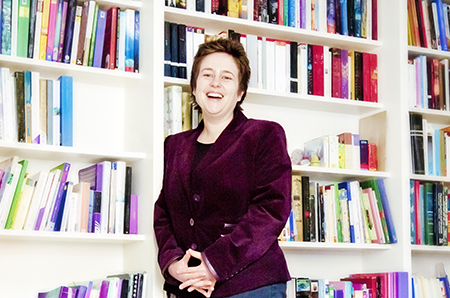 Mathematical research will be transformed into musical performance by Dr Emily Howard when she takes up a ten month residency in the University of Liverpool’s Department of Mathematical Sciences (DMS).

Funded by The Leverhulme Trust, Dr Howard is aiming to spend time engaging in conversation with DMS researchers, and absorbing ideas from their current mathematical research, before moving on to develop “sonic experiments” related to her discoveries.

Dr Howard said: “I am very much looking forward to becoming DMS Leverhulme Artist in Residence this month.

“Ideas from maths and science are so important within my own musical compositions and it is really exciting to have this opportunity to work closely with DMS mathematicians; to learn and absorb concepts from current mathematical research.

“Two-way interactions are a tremendous stimulus for all concerned.”

The young Paris-based duo scapegoat (Australian saxophonist, Joshua Hyde and Canadian percussionist, Noam Bierstone) will be involved in the realisation and performance of these “mathematical ideas in sound”. Dr Howard will draw upon these experiments to create a new musical composition.

The residency will be extensively documented and updates will be posted regularly on the DMS website.

Dr Howard, an Oxford University graduate in Mathematics and Computer Science, will begin her new role fresh from a stint with the London based Mahogany Opera Group, culminating in a performance at the Group’s Research and Development Festival in January.

Welcoming her to the department this month will be Head of the School of Physical Sciences, Professor Ronan McGrath.

Prof McGrath said: “We wish Dr Howard every success during her stay.

“Such interactions are a major contribution to maintaining a culture and climate of creativity and enquiry which are the hallmarks of any successful research university.”

Dr Howard’s compositions embrace a diverse range of influences including philosophy, poetry, sport and even chess.

Her background also remains influential, she says, with processes and concepts derived from mathematical and scientific principles fundamentally important to her creative practice, contributing both to inspiration and generation of compositional procedures.

The University’s Professor Lasse Rempe-Gillen, himself a musician, will be managing the project.

He said: “We are delighted to be welcoming Dr Emily Howard as DMS Composer in Residence.

“We look forward to this exciting collaboration – it will be fascinating to see our own ground-breaking research reflected in Dr Howard’s artistic process.”

Dr Howard added: “I grew up in the Liverpool area. Over the years I have enjoyed working with many Liverpool-based ensembles and institutions including the Royal Liverpool Philharmonic Orchestra which has commissioned and performed several of my works. I am delighted to strengthen my long association with the city through this partnership.”

Find out more about studying Mathematics at the University of Liverpool, by visiting our Study pages