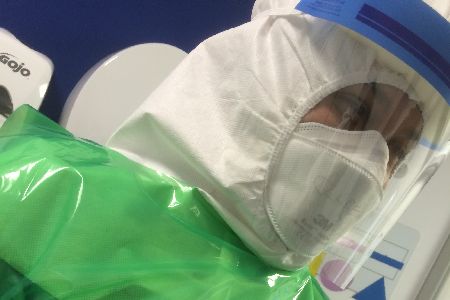 Professor Tom Solomon is Head of the University of Liverpool’s Institute of Infection and Global Health.

At last there is some good news in the terrible struggle to bring the Ebola outbreak in West Africa under control. One year after it began, with at least 21,000 cases, and more than 8000 deaths, it looks as though the disease is beginning to slow down.

At its worst there were hundreds of new patients each week in the three worst affected countries; last week there were just 8 in Liberia, and 20 in Guinea, though Sierra Leone still had more than 100. The cases are falling because of the enormous efforts to track down people who are sick, and isolate them in hospital before they can infect others.

Last week also saw the first batch of a new experimental vaccine being shipped to Liberia. The vaccine, produced by the British pharmaceutical company GlaxoSmithKline, contains part of the Ebola virus genetic material. It thus prepares people’s immune systems, to be ready in advance, should they become infected. Trials of the new vaccine, which has already been tested in volunteers in the UK, should begin very soon in Liberia.

Vaccines aim to stop people becoming infected. But for those who are infected, new antiviral drugs are needed. Several such treatments are currently being assessed in clinical trials in West Africa. Ironically, as the number of new Ebola cases drops, the chance to fully evaluate these therapies gets harder. If there is no disease, you cannot determine whether vaccines are protecting people from it, or drug treatments are working.

But although vaccine and treatment trials are progressing, and the disease is slowing, we must not become complacent. The weekly number of cases has fluctuated in the past, and unless we remain vigilant things could deteriorate again. More medical and nursing staff will be needed, especially since the typical tour of duty is just a few weeks.

This week I was in PPE training with one of our research nurses Claire, who is due to go out to West Africa in the next week or two. PPE, or personal protective equipment, is what stands between you and the virus when you are dealing with something like Ebola.

I have worked for years with dangerous viruses in the laboratory, and so am used to wearing all sorts of strange gear. But as we practised gowning each other up, putting on the three sets of gloves, and the breathing mask and face shield, this felt different; not so much because of the paraphernalia involved, but because the stakes are so much higher.

In the laboratory there is just you, and the virus. And unless something goes badly wrong, it will sit there, in the vial, until you are ready to work with it. But in the clinical setting, when the virus is in the body fluid of patients, it is a different story. Sick people can be unpredictable, especially if they are scared or confused. In the laboratory it is unusual to get any virus on your protective clothing. In contrast, caring for a patient who is vomiting or bleeding means you are bound to get virus on your gloves, your gown, and your boots. This is why how you take the gear off is actually more important than how you put it on.

It only takes one minor slip, one momentary lapse of concentration, to put yourself at risk. With the extensive training Claire is getting, I feel confident that she will be fine.

We should all be thankful for Claire and the many others like her. For without such heroism, this outbreak would undoubtedly be continuing to grow.

Article originally posted in The Independent