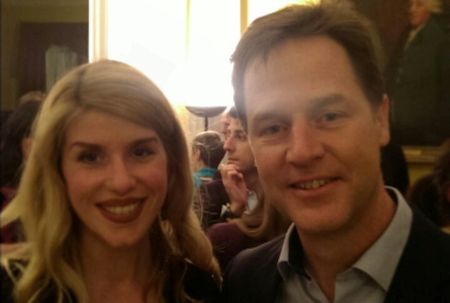 Dr Longden. from the Institute of Psychology, Health and Society, was nominated for her academic and media work, highlighting the psychosocial causes of mental health difficulties.

She was also recognised for her public discussion of her own experiences of trauma and psychosis particularly her 2013 TED talk, ‘The Voices in My Head.’

Dr Longden’s TED talk has been viewed nearly three million times, been translated into 34 languages, and was named by the Guardian newspaper as ‘One of the 20 Online Talks That Could Change Your Life.’

The Awards reception marked Time to Change’s ‘Time to Talk’ initiative which encourages people to challenge stigma and speak out about mental health issues.

Dr Longden said: “It was good to hear Mr Clegg refer to the ‘Cinderella status’ of mental health research and clinical input in comparison to other healthcare branches.

“He stated that psychiatric treatment must be placed on the same level as physical health, and that taboos surrounding mental health issues must end.

“These remarks were very warmly received by the guests and it is particularly encouraging for a party leader to place mental health at the forefront of a mainstream political party policy programme.“

During the ceremony, Eleanor discussed some of the innovative work being carried out at the Institute which included contributions from herself, Professor Peter Kinderman and Professor Richard Bentall to the British Psychological Society’s recent report ‘Understanding Psychosis and Schizophrenia’.