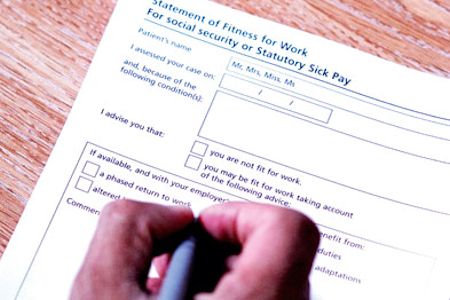 Research by the University of Liverpool has found evidence that the UK ‘Fit Note,’ which replaced the ‘Sick Note’ in 2010 in the UK, is linked to fewer people taking long term sick leave of 12 or more weeks.

A study published in Occupational & Environmental Medicine also found that the proportion of people off sick with depression, anxiety, and stress has increased noticeably.

A ‘Fit Note’ is a statement of fitness for work. It is provided by a doctor to an employee who has been off work for longer than seven days and advises employers if an employee is fit enough to return to work.

It replaced the ‘Sick Note’ in April 2010 and differs from its predecessor in that a person does not have to be fully fit before resuming work.

It enables GPs to include advice to both employee and employer on how an individual may be able to go back to work if given support which could include a phased return, amending duties, altering working hours, or making workplace adaptations.

Researchers from the Institute of Psychology, Health and Society analysed ‘Fit Note’ data from 68 general practices of varying list size in England, Scotland, and Wales between 2011 and 2013, and compared it to `Sick Note’ data from seven practices in 2001-2.

The comparison of `Sick’ and`Fit Note’ data found that fewer people are taking 12 or more weeks off work than they did in 2001-2.

The data showed nearly 14,000 periods of sick leave were taken between 2011 and 2013 at the 68 practices.  Over half (53%) of all certified periods of sickness absence did not last beyond three weeks; around a third (35%) lasted less than 12 weeks; and the remainder exceeded 12 weeks.

However, the data also revealed that being male, older, and living in a deprived area was significantly associated with taking time off work lasting more than three, six, and 12 weeks.

There was also a marked increase – from 26% to 38% – in the proportion of time off work for mild to moderate mental health issues (depression, anxiety, and stress) between the two periods, and this accounted for almost one in three of the fit notes issued to working patients in all 68 practices.

Professor Mark Gabbay, from the University’s Department for Health Services Research who led the research, said: “Our research found that there has been a reduction in the number of people taking more than 12 weeks off work since the `Fit Note’ was introduced compared to rates in the same practices a decade before.

“Furthermore, the proportion of sick leave due to mild to moderate mental health problems seems to be rising, despite investment across the country in services designed to increase access to psychological services for patients with these conditions, which was hoped would reduce the burden of sickness absence from those with such difficulties by enabling them to recover sooner.

“However, it is important to also consider the wider socioeconomic contexts when interpreting this data.”

The other notable change was a reduction in the proportion of sick leave taken for respiratory health problems, which fell from 10% to 6%.

In 2011, an estimated 131 million working days were lost to sickness absence in the UK, costing £13 billion in state benefits plus £9 billion to employers in sickness benefits.