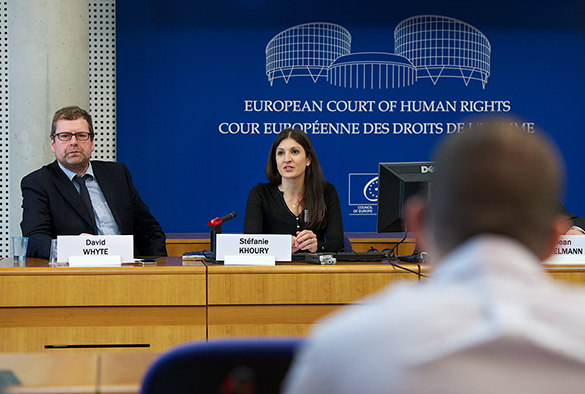 A University of Liverpool report recommends extending the International Criminal Court Statute to allow corporations, as well as people and states, to be prosecuted for corporate human rights abuse.

Currently, the human rights obligations of non-state entities are bound only by voluntary codes of conduct, leaving little room for redress for those affected by the activity of corporations; whether suffering torture and disappearance in Colombia, or intimidation and death in Nigeria.

In response, Dr Stefanie Khoury and Professor David Whyte, from the University’s School of Sociology, Social Policy and Criminology, organised a series of focus groups at the European Court of Human Rights (ECtHR) made up of senior judges, lawyers and members from the Registrar’s office, to assess the issue and determine the best route forward.

Dr Khoury said: “Violations of human rights by corporations continue despite voluntary mechanisms and codes of conduct, and are often committed with impunity. At what point will the international community take responsibility and implement mechanisms that will adequately address corporate harms?”

”The relative ease with which corporations elude responsibility for violations of human rights is scandalous; and it is unacceptable that states shy away from adopting binding corporate accountability mechanisms that put human dignity before corporate power”

The focus groups quickly identified the power of the corporate lobby as a barrier to action, as well as the concern that imposing binding legal norms may cause economic damage in emerging economies. The difficulty determining responsibility in large and highly complex transnational corporations was also identified as a key problem.

Dr Khoury said: “Governments have demonstrated that they are willing and able to put in to place complex trade agreements that protect corporations. The relative ease with which corporations elude responsibility for violations of human rights is scandalous; and it is unacceptable that states shy away from adopting binding corporate accountability mechanisms that put human dignity before corporate power.”

To combat this, the study, based on the outcome of the focus groups and entitled: New Mechanisms of Accountability for Corporate Violations of Human Rights, identifies a number of possible remedies. These include a reorganisation of the ECtHR to create a section engaging specialist judges in the assessment of human rights abuses by non-state entities, as well as the extension of the Rome Statute in the International Criminal Court (ICC).

The report also suggests utilising specialised permanent tribunals at regional level, alongside national mechanisms overseen by regional human rights commissioners. A corporate human rights chamber could also be established at the International Court of Justice in The Hague.