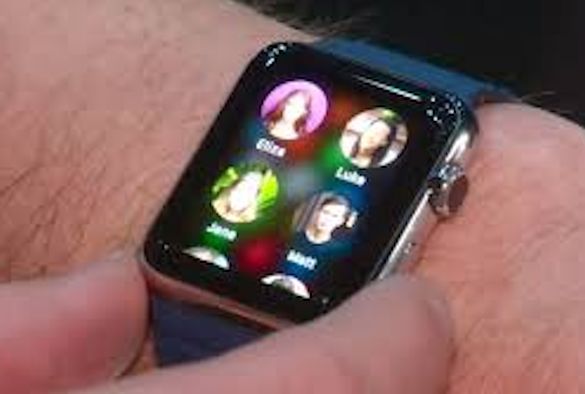 Dr Terry Payne, from the University’s Department of Computer Science, lectures on the Mobile Computing module which teaches students the programming skills needed to develop the next generation of mobile devices.

“Much is currently being made about Apple’s new Watch (available for pre-order on April 10th and launched later that month) as the next paradigm shift.  A smart device that elicits memories of Dick Tracy; that offers control of the world around us.

We’ve  heard how the Apple Watch could be used to buy goods from the whole-food stores, present our boarding card as we catch a flight or even open the garage doors back at home for our beleaguered kids (they lost their door keys – I’m sure there must be an app to help them with that).  O brave new world, that has such Apps in’t!

However, this belies a reality in which we already occupy.  There is little here that is new; we already live such a digital life due to the ubiquitous smartphone, that is always connected and offers a gateway into AppLand.  The paradigm shift we will witness in the coming months is that of satellite devices to the control hub that is our phone.

Apple’s Watch is not a standalone device, but a companion piece that offers additional interactivity to our ever-connected smartphones.  Think of it as a second screen to our laptops, as an intimate assistant that discretely informs us that there are notifications awaiting our attention.

And that is where its true utility lies; no longer do we have to dig out the phone to check an incoming message, or tweet the latest thought as a simple glance at the wrist will do.

Context will be key; Apple introduced Passbook to manage your coffee card as you buy your favourite beverage, or present the boarding pass for your flight as you walk to the gate.

Such apps will proliferate as the need for your Watch to “… just do the right thing…” becomes more paramount.  These apps will not reside on the Watch itself, but exist on the phone, offering interconnectivity to the profusion of services we are familiar with and exploit daily.

The convenience of having access to much of the functionality of our phones from the Watch will simply extend an unconscious but ongoing revolution.   Intimacy was the buzzword at the launch in March.  We saw how it was possible to share your heart-beat with your loved one, thanks to the integrated heart rate monitor – another concession to the fitness revolution.

Reminders to be active will stave of a sedentary lifestyle, as we become increasingly conscious of how unfit we are.  Again, however, the significance is deeper; once donned, a simple password tells the watch you are wearing it.  For as long as that persistent beat is sensed, further authentication is unnecessary.

Goods can now be bought through apple-pay with a tap and a gesture by the till, and doors (metaphorically, as well as physically) will be opened simply by its presence. Will it be the liberator that we all crave?  Apple has built a reputation on the fact that their carefully crafted products work straight out of the box.

But again, the true benefit one will gain from the Watch will only be realised after several days and hours of tinkering: what alerts should be sent to the watch, and what can wait later; what apps offer useful “glances” and what simply clutter up the display.

Sir Jony Ive declared that “… the Watch is their most personal product yet…”, but as with any relationship, you only get more out if you are willing to put more into it.  This device may work for some, but not necessarily for all.

As with every utopia, there is a dystopian underbelly.  Our privacy is continuously eroded, with big-data repositories sucking up every aspect of our daily lives; data that reveals more about our intimate habits and preferences than we would willingly share with a loved-one.

The hype that such devices can enhance our lives is not completely unjust; the convenience and awareness endowed by technology is clearly documented… just as the twenty-four hour access to information has eroded our right to “quiet time”.

The convenience of any-time, anywhere e-commerce and proliferation of the Internet of Things has clearly enhanced our abilities to get things done, and has enhanced our everyday lives.  Yet it has simultaneously reinforced the notion that every hour should  be spent efficiently, be it work, or play.

Simply “being” is a luxury that we can increasingly ill-afford in an ever dynamic and interconnected society.  Time is a valuable resource.  And although the vision offered by Apple of this digital utopia is clearly seductive, the personal and societal cost is as yet unclear.”