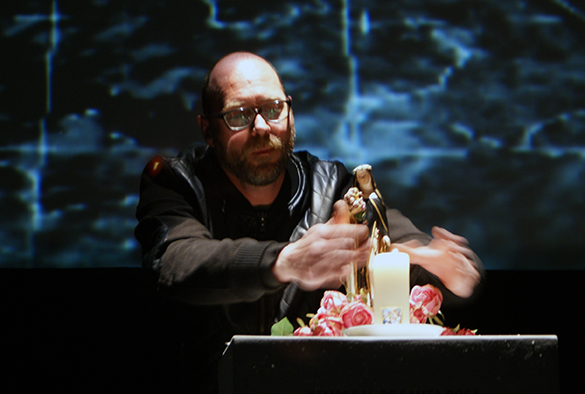 A major exhibition organised by the University of Liverpool and featuring digital artists from across Latin America, is being disseminated on twitter with users of the platform asked to vote for their favourites.

The Cities in Dialogue show took place at FACT in October, as part of Liverpool Independents Biennial, and now curators, Professor Claire Taylor and Dr Jordana Blejmar, of the University’s School of Histories, Languages and Cultures, are releasing the images throughout March using the exhibition’s twitter account, @latamcyber and the hashtag #citiesindialogue.

Professor Taylor said: “All the artists use digital media and digital technology, and they all use it in different ways. We thought instead of using twitter to just tell people about the work, how about using it as a way to get feedback and allow people to connect with each selection of art.”

Throughout the month, a week will be dedicated to each of the four artists – Brian Mackern, Bárbara Palomino, Ricardo Miranda and Marina Zerbarini. Their work will released through twitter, with a prize awarded for the images most favourited and most retweeted by users.

”We don’t want people to just look at the images, but to feel they can play an active part in the creation of the artwork”

Professor Taylor said: “Twitter allows people to give us a quick opinion of each work of art, and we are also hoping people will use the hashtag #citiesindialogue to talk about the project. We don’t want people to just look at the images, but to feel they can play an active part in the creation of the artwork.”

The exhibition, and subsequent twitter gallery project, grew out of Professor Taylor’s AHRC-funded Fellowship research into the ways Latin American digital artists explore national and regional identity through their online representation of iconic locales. Her research focussed on Uruguayan, Argentine, Chilean, Colombian, Nicaraguan, Cuban-American and Chicana/o artists, and their work.

Professor Taylor, who specialises in Hispanic Studies, found three trends common across national boundaries. The first was the tactical use of new media technologies. The second was the use of online technologies to represent offline place; and the third was the combination of online participation and citizen participation on the streets.

To represent this, the FACT exhibition in October showcased artists whose works represented place. Now being displayed through twitter, the work, ranging from maps to soundscapes and street activity, aims to encourage the viewer to re-imagine urban spaces, and discover the hidden memories they hold.

It will be followed in April by the premiere of the new Residence Artwork created in Liverpool by Uruguayan artist, Brian Mackern.

Follow @latamcyber to view the images and #citiesindialogue to join the conversation. You can find out more about the project by visiting the Latin America Cyberculture blog, http://latamcyber.wordpress.com/