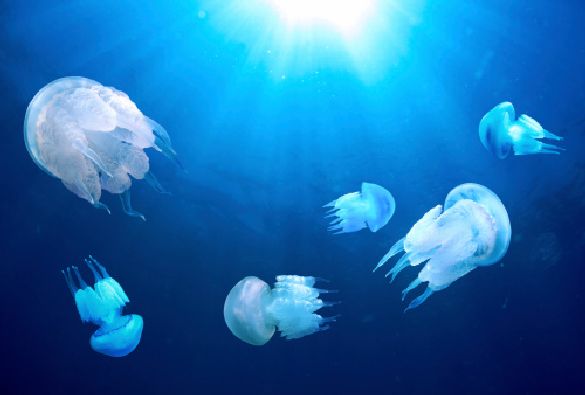 Scientists at the University of Liverpool and Queen Mary University, London, have shown that changes in body shape in ‘skin-breathing’ aquatic animals could explain why animals use energy more slowly as they grow.

Energy sustains life, but for more than 80 years scientists have tried to work out why animals often use it more slowly as they grow.

Many animals use energy at the same rate per gram of body weight during certain periods, especially early stages of life, but this rate decreases during other times, particularly in later life.

Liverpool and Queen Mary scientists, in collaboration with Juniata College, Pennsylvania, investigated the energy usage and body shapes of jellyfish; oysters; mussels; lobsters; comb jellies; copepods and salps to understand why energy use varies at different points in their lifespan.

These animals can change their shape as they grow – some from their ‘standard’ body shape to a totally flat shape.

Ths researchers found that the surface area of the animals’ bodies, which exchanges materials such as oxygen, essential to sustain life, alters with the various shapes the animal makes, varying the amount of energy they use at different points in their growth.

The findings falsify predictions of several current models, but supports new theories that explain how energy use varies between animals at different sizes.

Co-author Dr David Atkinson, from the University’s Institute of Integrative Biology, said: “A great thing about animals that change shape as they grow is that they allow us to distinguish between different theories that aim to predict how much energy an animal uses at different sizes.

“Growing animals that can breathe through their skins do not reduce their energy use as much when their body shape becomes flat, compared with when they keep the same basic shape. This is consistent with predictions based on the amount of skin surface, but is opposite to predictions based on the costs of distributing materials throughout the body.”

The paper, Shape shifting predicts ontogenetic changes in metabolic scaling in diverse aquatic invertebrates, is published in the Proceedings of the Royal Society B.