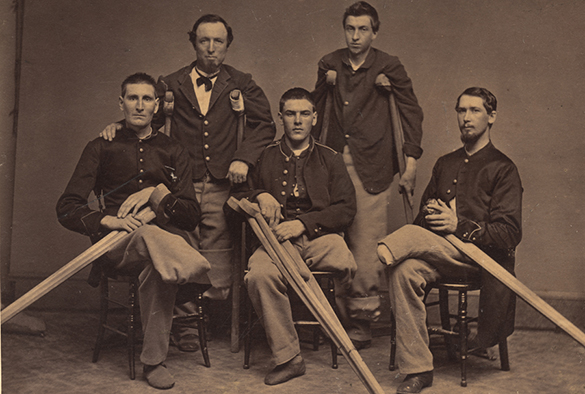 The University of Liverpool will become the first UK host of the US National Library of Medicine travelling exhibition Life and Limb: the Toll of the American Civil War.

The show, which combines the US display with original art, rare books and research from both staff and students, explores the experience of physical trauma and disability suffered by those who fought in the four year conflict. Since 2011, and the start of sesquicentennial Civil War commemorations, Life and Limb has visited 60 locations across the US.

From 16 April, the University’s School of Histories, Languages and Cultures and School of the Arts will host the exhibition in historic 19 Abercromby Square. The former home of Confederate financier and merchant, Charles Kuhn Prioleau, the building has direct links to medical innovators and the conflict. Its owner arranged a five day grand bazaar at St George’s Hall to raise funds for the relief of wounded and imprisoned Confederate soldiers.

The catalyst for the exhibition’s arrival in Liverpool is Dr Stephen Kenny’s research into ‘dark medicine’.

Historian, Dr Kenny, said: “Liverpool is the only international higher education host for this exhibition and, given the city’s history and American connections, a wholly logical choice of venue.”

Dr Kenny, from the University’s Department of History, focuses on slavery, race and medicine in 19th Century America. His research has examined topics such as white thinking about black health, the medical profession’s reliance on the exploitation of enslaved ‘subjects’ and black experience under such pressures.

“Liverpool is the only international higher education host for this exhibition and, given the city’s history and American connections, a wholly logical choice of venue”

Dr Kenny said: “The new scholarly literature on medicine in the American Civil War has been central in framing and organising my project. Previously overlooked soldiering experiences, such as disability and trauma, are now receiving long overdue attention.

“While the traditional historical view saw medical practice in the war as being near medieval, new research finds abundant evidence of progress and modernisation in medical and public health responses to the conflict – including the establishment of the vast US Army Medical Museum using human specimens harvested from battlefields and field hospitals. Under slavery, black people were exploited for anatomical dissection, experimental research and the development of medical museum collections.”

New work by artist –and amputee – Angel Martin will be displayed alongside the artefacts to deliver a modern, personal visualisation of the exhibition’s themes. A companion book, Life and Limb: Perspectives on the American Civil War, will also be published by Liverpool University Press.

A highlight for Dr Kenny will be the inclusion of rare books from the University’s Special Collections and Archives, including the seminal Medical and Surgical History of the War Rebellion.

Dr Kenny added: “We are privileged to have original signed copies of these landmark volumes (published between 1870 and 1880), which contain vivid colour lithographs and graphic insights into the injuries and trials of soldier-sufferers in the war.”

Life and Limb: the Toll of the American Civil War will run at 19 Abercromby Square, from April 16 until June 20. For more information, please visit https://www.facebook.com/lifeandlimb