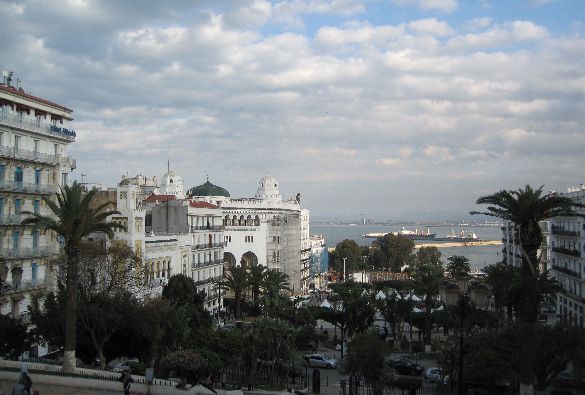 Dr Robert Blackwood, from the University of Liverpool’s Department of Modern Languages and Cultures, reports from Algiers, after a series of meetings regarding UK-Algeria collaborations.

“Based on fairly limited and anecdotal evidence, Algeria does not feature on many people’s bucket list or plans for future holidays. It is not an exaggeration to conclude that if Algeria appears at all in an individual’s world perspective, it occupies a peripheral position, and one that is invariably coloured by a narrative of violence, terrorism, and danger.

Representations in the UK’s mainstream media often paint Algeria as a basket case, not quite the failed state of Somalia, South Sudan, or the Central African Republic, but a country still mired in the chaos and horror of its dark decade in the 1990s. The spectre of ISIS looms over the border from Libya, and graffiti – in French – on the walls of Algiers’ famous casbah, defiantly calling for the extension of the Islamic State into Algeria, is a favourite image for picture editors.

Against this, a visit to Algiers to discuss PhD studentships, to meet with graduate students at two universities, and to undertake some fieldwork on multilingualism in the city centre was met by some with surprise and concern. The surprise was a mixture of incredulity at exposing myself to the notional danger of being in Algeria, and of bewilderment as to why a UK HEI might be interested in closer ties with a country which to many falls into what once might be considered France’s sphere of influence.

Even before I obtained my visa for travel, the relationship between France and Algeria asserted itself; discussions with the consular office in London, floundering in English, suddenly became much more straightforward in French. French is not, as we discuss in undergraduate seminars from the first year onwards, the possession of France, but in a North African setting, French inevitably connotes with France in several (potentially contradictory) ways.

The new élan in Algerian-British relationships is predictably viewed through the prism of the Algerian-French connection, a bond contested over the 130-year colonial occupation and 50 years of independence of what is now Africa’s largest country. Anniversaries punctuate the collaborations between the governments of the UK and Algeria; November 2014 saw the 60th anniversary of the Algerian revolution (and I was presented with a commemorative medal during my visit), and 2015 is the 50th anniversary of the release of Pontecorvo’s landmark film, The Battle of Algiers, reason enough to borrow it from the Sydney Jones Library. Algiers itself looks like a French city as imagined at the start of the twentieth century, with wide, tree-lined boulevards, carefully landscaped parks, arcades and passageways, and glorious views onto the Mediterranean Sea.

A key purpose of my visit was to discuss the scheme, co-ordinated by the British Council, and funded by the Algerian Ministry of Higher Education, to arrange for 500 graduate students to complete doctorates in the humanities and arts in UK universities as part of Algeria’s plans to train some of its best students, to extend the role of the English language in higher education, and to participate in the exchange of ideas and knowledge for which British universities have a worldwide reputation.

This scheme provides the opportunity to travel to an English-speaking country – something the majority of people with whom I met had not done – and not only embark on a research project that genuinely excited them, but also work hard on their language skills. We are all too aware of the demands of study and – in particular – high-level research in a second language, and Marina Warner reminds readers of The London Review of Books of the numerous challenges generated by ‘foreign applicants with very poor English’ courted by some British universities.

My experience in Algiers, meeting students not only from Algiers 1 but also from the University of Tizi Ouzou in eastern Algeria, was wholly positive, and the levels of English striking – the potential candidates for this scheme are both dextrous and relaxed in speaking English, despite the fact that, for many of them, this was their first encounter with a first-language English speaker.

There was only a short amount of time for seeing something of Algiers, during which the popular caricature of the city and the wider country was resoundingly refuted. Algiers is a relaxed, largely secular city, whose citizens make the most of late-afternoon spring sunshine, just like their Mediterranean neighbours from Alicante to Zadar. I encounter the basilica of Notre Dame d’Afrique towers above the city; an active synagogue sits alongside a mosque in the casbah. Algiers projects itself like other cosmopolitan Mediterranean cities, such as Marseilles, Naples, or Barcelona.

The next phase of this collaboration will see the British Council convene a roundtable discussion devoted to Algeria at the annual Going Global conference in London, followed by a two-day event bringing representatives of Algeria’s Ministry of Higher Education to the UK to meet with interested parties from British universities. Given the enthusiasm and interest already attested in the Faculty of the Humanities and Social Sciences, Algerian Arabic, Berber, and Tamazight might soon join the multitude of voices around Abercromby Square.”