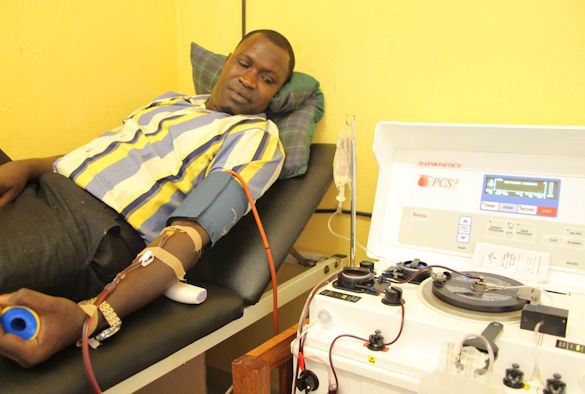 The first donations of plasma, from survivors of the Ebola epidemic in Sierra Leone, have been received by an international research team working to help tackle current and future disease outbreaks in West Africa.

The team, led by scientists at the University of Liverpool and colleagues at the College of Medicine and Allied Health Services, Ministry of Health, Sierra Leone, is investigating how plasma from Ebola survivors could help treat patients with the disease at the Ebola Treatment Unit, run by the 34th Regiment Military Hospital group in Freetown.

Dr Calum Semple, from the University’s Institute of Child Health, and his collaborators developed a convalescent plasma protocol in readiness for an outbreak, such as Ebola, as part of the outbreak preparatory work of the International Severe Acute Respiratory and Emerging Infection Consortium.

The study is one of several being supported by the Wellcome Trust’s platform for evaluating experimental Ebola therapeutics in West Africa.

Dr Semple said: “Convalescent plasma therapy has been used since 1891 to treat severe diseases. We want to find out whether Ebola survivor’s plasma contains protective antibodies and if their plasma can be used safely to reduce the number of deaths in this and future outbreaks.”

People who have survived Ebola develop antibodies in their blood, which appear to protect them from repeated infection. These antibodies will be given to Ebola patients in a plasma transfusion to help them fight the infection. As a result of the current outbreak, there are now a substantial number of Ebola survivors.

Ebola survivor and plasma donor, Ahmed Wurrie Barrie, said: “I urge all survivors to support this research so that more lives are not lost in Sierra Leone or anywhere else in the world. I wish to thank the researchers and hospital staff for their support in undergoing this simple procedure. I survived Ebola for many reasons; donating plasma to save more lives might just be one of them.”

While the principle of plasma or ‘serum’ therapy is well established, blood and plasma from recovered Ebola patients has only been used in a limited number of patients. During the 1995 Ebola outbreak in Kikwit, in the Democratic Republic of the Congo (DRC), seven out of eight patients receiving convalescent whole blood survived. Whether this was due to the transfusions or to other factors, however, is unclear.

Dr Jeremy Farrar, Director of the Wellcome Trust, said: “Convalescent plasma offers a potential treatment for Ebola in the short term that could be scaled up if proven effective. Global collaboration of this nature, including clinical researchers and multiple partners from across West Africa and the broader international community, is both unprecedented and essential if we are to bring the current outbreak under control and be better prepared for the inevitable future epidemics of this devastating infection.”

The use of convalescent plasma is being studied in all three of the West African countries affected by Ebola. Sierra Leone has been the worst affected country. The study in Sierra Leone was established by Dr Semple by pooling resources from a sister study in Guinea, led Dr Johan van Griensven of the Institute of Tropical Medicine Antwerp and a study in Liberia led by Dr David Hoover of ClincalRM.

Dr Janet Scott, clinical lead from the University of Liverpool’s Institute of Translational Medicine, said: “All of our plasma donors are well and enthusiastically encouraging others to come forward.  It has taken a huge amount of work from all the teams on the ground blood bank staff worked through the lockdown to make this donation programme a success.”

The project is also funded by the Ohio based Clinical Research Management Inc (ClinicalRM) under a grant from the Bill & Melinda Gates Foundation and supported by the World Health Organization (WHO); the International Severe Acute Respiratory and Emerging Infection Consortium (ISARIC); and international collaborations across the public, private and not-for-profit sectors to tackle the Ebola emergency.