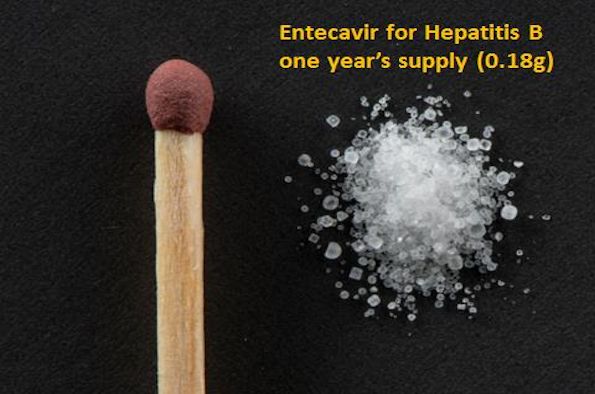 Scientists at the University of Liverpool have demonstrated that a drug for treating hepatitis B virus (HBV) could be mass-produced for only £24 ($36) per person per year, versus the current UK NHS price of £4,600, and the US price of over $15,000.

Hepatitis B causes liver cancer and liver cirrhosis, both of which can be fatal. In 2013, an estimated 686,000 people died from the Hepatitis B worldwide and more than 350 million people are chronically infected with the virus. Hepatitis B is transmitted through blood and infected bodily fluids. There is also a risk of infected mothers passing on the Hepatitis B virus to their children.

Researchers from the University’s Institute of Translational Medicine analysed the factors which influence the cost of manufacturing of drugs for Hepatitis B, including the cost of the raw materials, the amount of drug needed and the patent situation of each drug.

They found that the drug entecavir (known as Baraclude, Bristol Myers Squibb, in the US and Canada ) has the potential to be mass produced as a generic drug at a fraction of its current price which would mean that all countries, including developing countries, could afford to use it.

Entecavir is an effective antiviral drug used in the treatment of HBV infection with few adverse side effects to patients, low levels of resistance. The dose is only 0.5 milligrams per day, so only a fifth of a gram would need to be produced to provide a year’s supply.  This is one reason why this drug is so cheap to manufacture.

Currently, entecavir is the most expensive drug for Hepatitis B on the market in both developed and developing countries. However, the expiration of its patent in February 2015 in the USA and other countries, which means it could now be manufactured as a generic drug by other companies at a far lower cost. Entecavir becomes generic in the UK in 2017.

Dr Andrew Hill, Senior Visiting Research Fellow in the University’s Department of Pharmacology, said:  “We have shown that the Hepatitis B drug, entecavir, could be mass produced for only £24 ($36) per person per year.

“Combining mass vaccination with mass treatment would lead to huge reductions in the number of people being infected with Hepatitis B, and could significantly lower the death rates from the current 686,000 per year worldwide.”

This research is published in the Journal of Virus Eradication 2015.